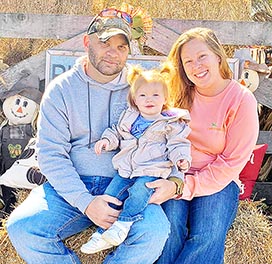 The late Dresden Fire Department Lt. Joshua E. Taylor is pictured with his wife Devin and their daughter, Laken.

DRESDEN (February 22) — The local community is mourning the death of the late Joshua E. Taylor, 36, of Dresden, who was one of its most beloved public servants.

Josh was born in Union City, Tennessee, on August 8, 1985. He was the son of Dresden Police Department Lt. Danny Taylor and Susie Cobb Taylor.
Beside his parents, Josh is survived by his wife, Devin Atnip Taylor, their young daughter, Laken Taylor, and a sister, Brandy (Taylor) Borgens.

Josh worked at MTD in Martin and served as a member of the Dresden Fire Department.

His family has a long history of public service. His mother and sister care for others in the nursing field. Josh’s uncle, Weakley County Veterans Affairs Officer Ricky Cobb, formerly worked for the Weakley County Sheriff’s Department, Dresden Police Department and other law enforcement agencies. Ricky’s wife and Josh’s aunt, Katrina, is a long-time team member for the local PBS station. Additionally, his aunt, Frances Dowden, works at the Sheriff’s Department.

Cobb said of his nephew, Josh, “He was a good young man. It’s been a bad year for a lot of folks, because of COVID.”

On the day of his death, members of the Dresden Fire Department issued a joint statement saying, “It is with a very heavy heart we announce that our brother we all loved so much went to be with the Lord this morning, with his family at his side. Lieutenant Josh Taylor was loved by us all; this stings and hurts.

“Please keep all of Josh’s family in your prayers in the days, weeks, and months ahead.

“Keep Devin and sweet Laken in your prayers, as they have lost the one they loved so much.

“Please keep both our department and the Dresden Police Department in your prayers as well.”

Josh was considered a fun-loving man with a heart of gold and one who liked to make others laugh.

Dresden Mayor Jeff Washburn said, “Josh was a dedicated firefighter, who worked for the Dresden Fire Department for many years. He was highly skilled and highly respected by the firefighting community across the county, and he’s going to be missed.  He was a mentor for many of the younger firefighters. He watched out for them and took care of them.”

As for his religious affiliation, Josh was a member of Central Baptist Church in Martin.

Funeral services for Josh were held Wednesday, February 16, 2022, at Bowlin Funeral Home in Dresden, and he was buried in Mack’s Grove Cemetery.

On the day of his service last week, members of the West Tennessee Eagle Riders conducted a flag line for the visiting family and friends.