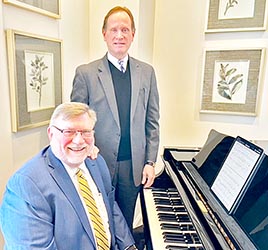 The February 7 meeting of The Fortnightly Club of Martin, held in the Tennessee Room of the new Martin Public Library, featured musicians Dr. Robert Nanney and Judge Tommy Moore, who presented a program titled, “Once Upon a Song.”

Dr. Nanney and Judge Moore discussed the history of four hymns and then sang “Here Is Love Vast as the Ocean,” “How Great Thou Art,” “It Is Well with My Soul,” and Great Is Thy Faithfulness.”

Fortnightly Club president Anna Clark introduced the program, which was arranged by member Jenna Wright. Dr. Nanney is chair of the Department of the Department of Mass Media and Strategic Communication at UT Martin and is also minister of music at Dresden First Baptist Church.  Judge Moore has been pianist at Dresden First Baptist for 41 years. The two are long-time friends and have sung together for many years in a quartet and in other choral groups.

When the pandemic shut down in-person services for a while at Dresden First Baptist, Robert and his wife, Jeanie, started a recurring Facebook program called “Once Upon A Song.” Each week Jeanie, who was unable to attend this Fortnightly program, told the story behind a well-known hymn, and then she and Robert sang the song. These podcasts can be found on Facebook at First Baptist Dresden Music Ministry.

For the Fortnightly program, Judge Moore began by telling of his travels in Wales while being part of a choral group. He sang with several men’s groups there and discovered the hymn “Here is Love Vast as the Ocean.”

Dr. Nanney spoke about the background of “How Great Thou Art,” a hymn that was never highly popular until it became part of the Billy Graham crusade and sung by George Beverly Shea. The song began as a Swedish poem written at a country estate during a violent storm followed by sunshine and birdsong.

“It is Well with My Soul” was written by a lawyer in Chicago after experiencing great financial and personal loss. It is a song of faith, belief, and hope.

“Great Is Thy Faithfulness,” written by an untrained Kentucky teacher who wrote over 1,200 poems, was also made popular by George Beverly Shea.

All these hymns were sung beautifully by the duo. A donation to Martin Public Library will be made in their honor.

After the program in the Tennessee Room, the group adjourned to a meeting room for a short business meeting and refreshments. Tables were adorned in red satin topped by red cyclamen, LED candles, and chocolates. Hostesses were Mollie Gallien, Linda Slack, and Melani Yarbro. Heart-shaped sandwiches with pineapple cream cheese filling and spicy pimento cheese were plated with a small brownie cupcake.