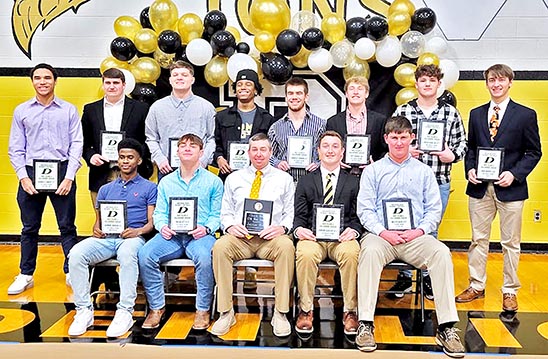 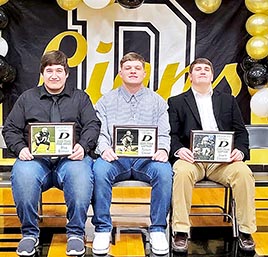 CAPTAINS AND PRIDE AWARDS: Alex Gilmer (L to R) was presented the For the Pride award, while Tatum Oliver and Gavin Cooper were both named as Team Captains during Saturday’s Dresden Quarterback Club banquet. 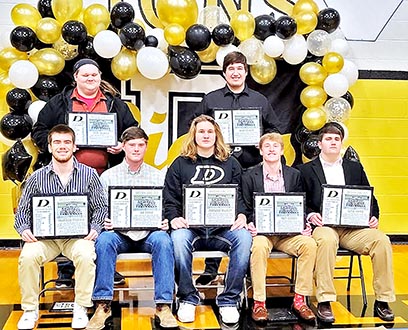 DRESDEN (February 12) – The Dresden Quarterback Club hosted more than 160 students, coaches, their families and members of the media during the For The Pride football awards ceremony Saturday to celebrate the achievements of the Dresden High School Lions’ football team for the past season.

President of the Dresden Quarterback Club, Tracy Eddings welcomed the guests and talked about traditions of the football team and how respectful and kind the team had been in the past year. She also announced the members of the team who would be receiving their four-year jacket for being a member of the football team all four years. They included Gavin Cooper, Ian Pinion, Trey Eddings, Alex Brackett, Chandler Turnbow and manager Paul Nichols.

Following was Cheer Coach Danielle Gardner, who spoke about the squad’s hard work and dedication during the football season and now as they cheer for the basketball season.

Dresden Football Head Coach Keith Hodge spoke about the hard work, dedication, and love for the program that every player and their family, every coach and their family, the school, all managers, film keeper, managers, the Quarterback Club and the community who all have worked to support the football program. He gave special thanks to Scott Killebrew for his support and hard work.

Assistant Coach Josh Grant honored the freshman players on the team and spoke of their hard work they must put into the transition of middle school to high school. Assistant Coach Daniel Harris spoke about this year’s sophomores and juniors.

Assistant Coach Tim Evans presented the For the Pride Award to the player who was unselfish and had a great attitude and was dedicated to play football everyday. This award was given to senior football player Alex Brackett for his dedication to the football program no matter what and performance during the season.

The final award of the night was presented by Coach Keith Hodge and senior player Trey Eddings.

This new award was described by Hodge, “The first annual award for this, we are calling this the Chuck West 12th Man Award. We created this through our Quarterback Club and we wanted it to represent exactly what Coach West stood for: pride, love for Dresden, and caring about our student athletes. All of us could come to the podium right now and say a million nice things about this man and what he meant to each of us… It was obvious for all who know him that family was more important than everything. To me, getting to know him was awesome and I know each one of us miss seeing him.”

Senior Trey Eddings also spoke saying, “His legacy lives in the hearts of all of us. But there was one man who above all from Chuck West that has his love for the game. This person shares the same love for the game and taught us to love the game as well. He inspires all as a team and as an individual. He has always encouraged us on and off the field. This person has touched my life and my teammates lives more than anyone else. He has kept us to a high standard and motivates us to do our best.”

The award for the Chuck West 12th Man Award was presented to Coach and son of Chuck West, Justin West for his many years of support and dedication to Dresden athletics on almost every grade level.