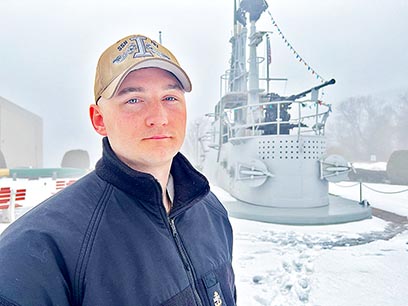 MILLINGTON (February 5) – A native of Paris, Tennessee, is serving aboard one of the nation’s newest, most-versatile warships, the future USS Iowa (SSN 797).

“My dad was a prior Submariner,” said Huckaba.

“I am a non-nuclear mechanic working on high pressure air, hydraulics, diesel engines and atmosphere control equipment,” said Huckaba. “I ensure the crew can eat, drink and breathe while underway. I also ensure the submarine can operate underwater.”

According to Huckaba the values required to succeed in the Navy are similar to those found in Paris.

“The lesson I learned from Paris is hard work from seeing my mother raise four kids while becoming a nurse,” said Huckaba.

The future USS Iowa, a fast-attack submarine named for the state of Iowa, is currently being completed at General Dynamics Corp.’s Electric Boat shipyard in Groton, Connecticut.
Fast-attack submarines are designed to hunt down and destroy enemy submarines and surface ships; strike targets ashore with cruise missiles; carry and deliver Navy SEALs; conduct intelligence, surveillance, and reconnaissance missions; and engage in mine warfare. The Virginia-class SSN is the most advanced submarine in the world today. It combines stealth and payload capability to meet Combatant Commanders’ demands in this era of strategic competition.
Known as America’s “Silent Service,” the Navy’s submarine force operates a large fleet of technically advanced vessels. These submarines are capable of conducting rapid defensive and offensive operations around the world, in furtherance of U.S. national security.

“Being able to lead and mentor sailors on the right path while helping build a nuclear submarine is my favorite part about serving at this command,” said Huckaba.

Strategic deterrence is the Nation’s ultimate insurance program, according to Navy officials. As a member of the submarine force, Huckaba is part of a rich 122-year history of the U.S. Navy’s most versatile weapons platform, capable of taking the fight to the enemy in the defense of America and its allies.

Serving in the Navy means Huckaba is part of a world that is taking on new importance in America’s focus on rebuilding military readiness, strengthening alliances and reforming business practices in support of the National Defense Strategy.

With more than 90 percent of all trade traveling by sea, and 95 percent of the world’s international phone and internet traffic carried through underwater fiber optic, Navy officials continue to emphasize that the prosperity and security of the United States is directly linked to a strong and ready Navy.
There are many opportunities for sailors to earn recognition in their command, community and careers.

“I am most proud of being promoted to the rank of chief petty officer and becoming a Submarine Pilot,” said Huckaba.
As Huckaba and other sailors continue to train and perform missions, they take pride in serving their country in the United States Navy.

“I went from small town USA to the Word’s Greatest Navy,” added Huckaba. “I feel like what I do makes a difference and means my kids will have a safer America.”