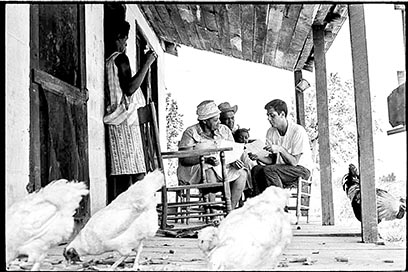 Jerry Surette discussing voter registration with a family on their porch, June 1964.

MARTIN (February 3) – The J. Houston Gordon Museum, located in the University of Tennessee at Martin Paul Meek Library, will feature “The Other Freedom Summer,” an exhibit that began February 7 which documents the work of New York college students to register voters in Fayette County. The exhibit is included in UT Martin’s annual Civil Rights Conference and will be available for viewing until April 29.

The exhibit showcases photos from Nick Lawrence, a photographer and Cornell University student involved in Fayette County voter registration and education drives in 1964. During this time, more than 68 percent of Fayette County’s population was African American, but this majority population accounted for less than 7 percent of its registered voters. Lawrence’s photographs document the resolve and strength of hard-working rural residents in advancing their right to vote.

Activists were paired off and assigned one of Fayette County’s 15 election districts to travel to individual farms and smallholdings, where they would encourage adults to register to vote. They were housed with local families, who were paid a small stipend to subsidize boarding their guests.

“Living in the North,” Lawrence recalled, “I could participate in the struggle for racial equality by attending demonstrations like the March on Washington and many local showings of support. When the opportunity arose to join the Cornell project, go to the South and directly participate in the movement, I jumped on it.”

The museum is open to the public from 8 a.m.-4:30 p.m., Monday through Friday, with no admission fee. Visitors are encouraged to wear cloth face coverings inside the library.

Parking for the reception will be in the Paul Meek Library parking lot on Wayne Fisher Drive off Mt. Pelia Road. Parking permits are available online at www.utm.edu/departments/publicsafety by selecting the “Online Visitor Parking Permit” link.

For more information, contact Sam Richardson, head of special collections and archives, at 731-881-7094.