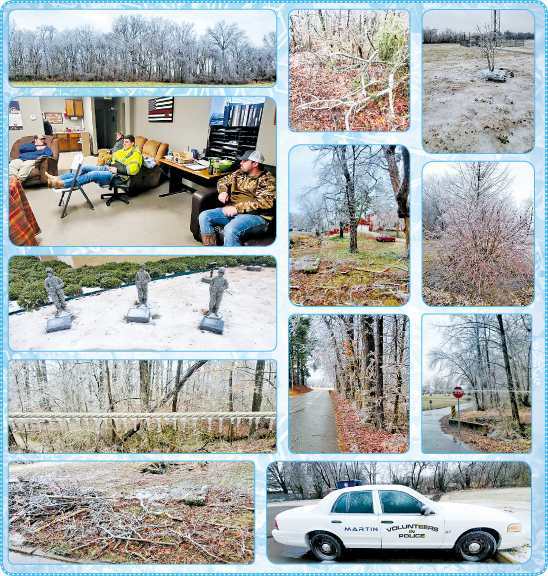 An ice storm that hit the region last week, making its entrance into Weakley County February 3, halted travel, school and business when a quarter of an inch of frozen precipitation blanketed the area. Schools closed Thursday and Friday. City halls and businesses followed suit. Weakley County emergency personnel asked drivers to stay home if necessary, as streets and highways were layered in ice. The weight of the ice also impacted electricity as limbs randomly fell onto power lines, knocking out service to approximately 10,200 Weakley County Municipal Electric System customers over the course of storm and the weekend following. Three warming stations were set up in the county, with the first opening at the Sharon Fire Station as volunteer firefighters (pictured above) set up generators, offered shelter from the cold and a charging station for phones. Two additional locations were set up through the Weakley County Emergency Management Agency and the American Red Cross. One shelter was located on the UT Martin campus, while the second was offered at the Recovery Center in Dresden. Photos by Lorcan McCormick/The Enterprise