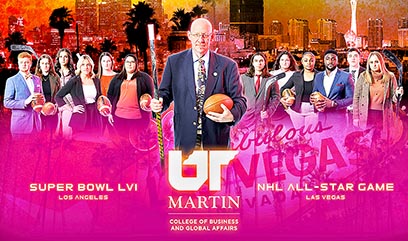 Members of the Sports Management Program, under the guidance of Josh Greer, are bound for the activities surrounding the annual Super Bowl this weekend, where they will take part in the behind-the-scenes activities.

NORTHWEST TENNESSEE (February 1) – A team of Bethel University Sports Management program students is en route to Super Bowl 56 in Los Angeles where they will serve as volunteers during pre- and post-celebratory events leading up to and after the game. This is the third consecutive year that a group led by Assistant Professor and Coordinator of Sports Management Josh Greer will travel to the host city to work events surrounding the game.

Going to the Super Bowl is at the top of the bucket list for many people. This year, 12 University of Martin students will not only get to cross that entry off, but will also get to experience the event from behind the scenes.

Along with Dr. Dexter Davis, associate professor of sport business, students assisted the local organizing committee at the NHL All-Star Game in Las Vegas, February 3-8, and on-location experiences personnel at the Super Bowl in Los Angeles, February 8-13. The group will spend these two weeks in Las Vegas and Los Angeles assisting in hospitality at the games, touring various facilities, and networking with industry professionals. This year’s trip to the Super Bowl will be the ninth in UT Martin history, but this is the first year that UT Martin students have worked at the NHL All-Star Game.

Davis began supervising trips to the Super Bowl around 17 years ago, when a colleague who worked for the Miami Dolphins invited him to bring students to help with Super Bowl Week activities. His group of seven Niagara University students, where he taught at the time, made such a strong impression on the event’s coordinators that Davis was invited to bring students again the next year. When Davis started teaching at UT Martin in 2013, he continued these trips and eight cohorts later, UT Martin students have built a reputation of their own.

“It’s all a reflection on how good our students are,” Davis said while discussing the opportunities provided by the NFL.

While looking into working at other sporting events, Davis was informed that the NHL was looking for assistance with its annual All-Star Game. After reaching out to a contact from past Super Bowls, Davis was able to get his students involved.

At the Super Bowl, students transport celebrities, current and retired players and NFL Hall of Famers from one pre-game event to another. The students have the opportunity to learn the most efficient routes to get each person where they need to be, and their experience translates into diplomacy and time-management skills, because they must assure that everyone arrives promptly as well as tactfully answer questions and demands from fans.

“They’re going to be in the stadium early on Sunday (for the Super Bowl), and they’re going to see everything from when it opens up and the staff start coming in, to when the gates open and fans start coming in, to when the game is over and fans are leaving,” Davis said. “They’re going to see all of the different elements of this major sporting event and how it occurs, and no matter how hard you try in a classroom, you can’t describe the magnitude of that event without being at that event.”

“These opportunities are not given and should not be taken for granted. We are blessed to have built such a dynamic program in such a short time frame. Our students are always wanting to get involved and volunteer for local and national events,” Greer said.

The unique learning opportunities these trips offer is recognized by the participating students. The goal is to set students up for success post-Bethel by providing key networking opportunities with industry professionals and hands-on involvement. Greer said that normally only about 20-25 universities nationwide participate in these major events.

“Certain things that I have always wanted to go to are now becoming available for me to go and it is honestly surreal,” said student William Lee.

Groups led by Greer have also volunteered at College Football Playoff National Championship games, NFL drafts, Tennessee Titans games and will work the Final Four for the first time this year. He credits relationships that he’s built over the years as key to getting Bethel involved.

“For me, it started with my alumni networking with the United States Sports Academy. Once I got my foot in the door, I started branching out my network and eventually teams and organizations started contacting me,” Greer said. It’s also thanks in part to these partnerships that Bethel students participate in these trips at no out-of-pocket cost to themselves or their families.

“The University supports our students and has budgeted money to assist students. We have also partnered with the Tennessee Titans ticket sales office to receive a percentage of the tickets sold for the regular season games. We will continue to do this next year too,” Greer said.

Greer has leveraged these occasions and outcomes to grow the program into one of the largest in the state, growth that led to the brand-new addition of a Sports Management concentration to its MBA portfolio.