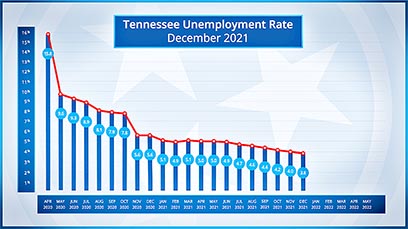 NASHVILLE (January 27)  — A majority of Tennessee’s counties end 2021 with minor increases in unemployment, including Weakley and adjacent counties; however, the average jobless numbers are down across the state and nation.

According to newly released data from the Department of Labor and Workforce Development, an increase in Tennessee’s unadjusted labor force participation had a slight impact on county unemployment rates in December. The report notes that unemployment increased in 87 counties during the month. Five counties saw rates go down, while the numbers remained the same in three counties.

The new county-level data comes after Tennessee recorded its lowest statewide unemployment rate in two years. The December 2021 seasonally adjusted figure of 3.8 percent was down 0.2 of a percentage point from December and the lowest the state has recorded since January 2020.

Unlike statewide unemployment data, county data is not seasonally adjusted to account for economic influences such as school breaks and severe weather events.

The state’s unadjusted labor participation increased to 60.6 percent in December, from 60.2 percent in December. When a person joins the labor force, that person is typically unemployed, and that can drive rates up. While the unadjusted number of employed individuals did increase during the month, which is consistent with seasonal hiring, the number did not grow enough to offset the labor force growth, which caused the county unemployment rates to inch upward.

Unemployment Up in Weakley and Neighboring Counties

Unemployment in Weakley County during the month of December 2021 was 3.2 percent, which represents a 0.3 percent increase from the previous month’s rate of 2.9 percent. However, it was 0.7 percent lower than the national rate and 0.6 percent below the state average. This amounts to a decrease of 1.9 percent since December 2020, when the jobless rate was 5.1. Out of a total countywide labor force of 15,579 workers, 15,076 were employed and 503 were unemployed.

In neighboring counties, Carroll County reported an unemployment rate of 3.7 percent, up 0.5 percent from the previous month’s rate of 3.2 percent. It was 0.2 percent lower than the national rate and 0.1 percent below the state average. This amounts to a decline of 2.3 percent since December 2020, when the jobless rate was 6.0 percent. Out of a total countywide labor force of 11,915 workers, 11,478 were employed and 437 were unemployed.

Gibson County’s jobless rate for December was 3.4 percent, which represents a jump of 0.3 percent from the previous month’s rate of 3.1 percent. These figures indicate jobless numbers were 2.5 below the unemployment rate in December 2020, when they registered 5.9 percent. Out of a total countywide labor force of 21,812 workers, 21,061 were employed and 751 were unemployed.

Henry registered 3.8 percent unemployment, which is up 0.4 percent from the previous month’s rate of 3.4 percent. Unemployment was 0.1 percent lower than the national rate and equal to the state average. The report indicates unemployment fell by 2.6 since December 2020. Out of a total countywide labor force of 13,253 workers, 12,747 were employed and 506 were unemployed.

At 4.0 percent, Obion County’s unemployment rate for December increased 0.4 percent from the previous month, but it was 2.8 percent less than in December 2020. Unemployment was 0.1 percent above the national average and 0.2 percent more than the state rate. Out of a total countywide labor force of 11,993 workers, 11,515 were employed and 478 were unemployed.

Total nonfarm employment across the state increased by 14,500 jobs between December and December. Tennessee employers added the largest numbers of workers in the leisure and hospitality sector, followed by the trade, transportation, and utilities and the education and health services sectors.

Over the year, nonfarm employment in Tennessee increased by 96,400 jobs. The largest increases occurred in the leisure and hospitality, the professional and business services, and the trade, transportation, and utilities sectors.

Across the country, unemployment in December was at its lowest rate since March 2020, one month before the pandemic began to impact the nation’s workforce. The United States seasonally adjusted unemployment rate for December came in at 3.9 percent, down 0.3 of a percentage point from December’s rate.

Tennessee has many different services that can help unemployed residents find a new job or assist someone looking to skill up for a new career. There are nearly 100 American Job Center locations across the state where job seekers can meet with career specialists and come up with an action plan. They can also find assistance online. The journey to a new job in the Volunteer State starts at www.TNWorkReady.com. The site offers multiple resources in an easy-to-access format.