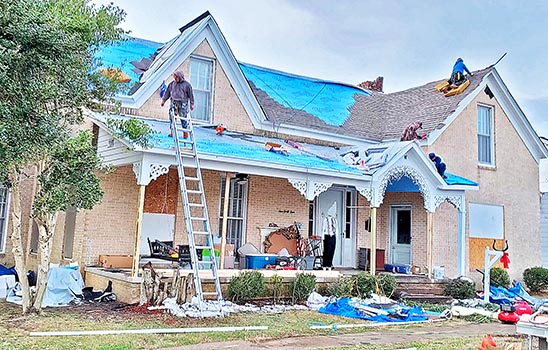 Workers replace shingles on the roof of a historic home owned by Mayor Jeff Washburn. Although the structure was determined to be a total loss, the mayor decided the residence, built approximately 100 years ago, is worth saving.

DRESDEN (January 7) — During a recent interview, Dresden Mayor Jeff Washburn discussed the loss of his business, Poppi’s Pizzeria, which was leveled by the storm. He also talked about the extensive damage the storm inflicted on his downtown residence.

Regarding the damage to his home, located at 144 South Poplar St., Washburn said, “We’re feeling pretty good right now. Our house was an insurance total.

“We had a contractor look at it and he determined the house was repairable. It’s going to require a lot of work to get it back to the condition it was in. The insurance company paid me the total amount of insurance, so we feel like we can make the required repairs to the house.

Washburn states on Saturday, January 8, local roofer, Elton Hamilton, began tearing off and replacing the old shingles on the part of the roof that’s still standing. And he will shingle the rest of the roof, once the trusses and decking are replaced on those parts of the roof that were destroyed in the storm. “It happens to be a lower section of roof not attached to the front over the main part of the house.

“The contractor is Mike Youngblood BWY (Mike and Becky Youngblood) of Dresden,” Washburn said. He started on the house on Wednesday, January 5, and we’ve had pretty good progress getting it sealed back up.

“We’ve got to replace part of the roof on the house. We’ll have to build a new garage, because it was totally destroyed. Over 50 percent of the windows in the house were broken out. It’s also going to require a lot of sheetrock work.”

He notes the back wall of his home was pulled out by the storm by approximately 20 inches, but the building contractor was able to jack up the wall, move it back in place and strengthen it, using long lag bolts and a sledgehammer. Additionally, an upstairs corner that was damaged by an airborne roof section from the garage was replaced. “A lot of the people I’ve talked to had the same thing happen to their walls. The tornado caused an implosion, which created a vacuum and pulled out the walls.

“Our home is coming back together slowly but surely, but a huge amount of repairs inclusive of replacing a section of roof and 18 broken windows. Actually, all 36 windows need replacing because it will be impossible to match the existing windows, Washburn said.

“Additionally, a lot of sheetrock work and painting remains to be done before we can consider moving back in.

“With the repair work to our home underway, thanks to a quick and fair insurance settlement by Tennessee Farmers Mutual, I am the more saddened for those who completely lost their homes and other valuables in our community. My prayers continue to go out to them each day.”

Washburn says he hopes to have his residence weathered-in by January 15, to prevent water damage. However, restoring the home to the condition it was in prior to the tornado will take much longer.

The residence had just been completely remodeled prior to the tornado causing major damage to the home.

According to Mayor Washburn, the original home was constructed shortly before or after the turn of the 20th Century, as evidenced by the hand-hewned log seals still remaining under a portion of the house to this day. There have been at least three major additions and/or renovations to the original home over the years, with the last major renovation occurring during the ownership period of Charles and Reba Nell Brasfield. Charles was a funeral supply salesman and farmer during his lifetime and Reba Nell assisted him in the business as well as being a housewife.

Once the storm damage is repaired, the 4,200 sq. ft. residence will have five bedrooms and three full baths. On the other side of the downstairs area, there is a formal living room, dining room, a full kitchen, breakfast area, study, walk-in closet, full bathroom, and a guest bedroom. It will also have an enclosed porch on the back of the house, and a large open porch on the front of the structure.

Regarding his business, Poppi’s Pizzeria, located at 115 South Poplar St., which was destroyed by the tornado, Washburn said he is not going to rebuild at the same location.

“I’m going to be making a donation of those lots to the city of Dresden, providing the city decides you build a municipal complex on the site, as I have proposed to the City Board. The building of Poppy’s Pizzeria will be later on our agenda. I will use the insurance money received for damage to the business to acquire property elsewhere and rebuild at a location with a higher traffic count and higher visibility.”

Mayor Washburn said he and his wife, Jennifer, will temporarily be staying with their daughter, Britne Mansfield, until they can move back in their own home. “Hopefully, that’s not going to be too long from now,” Washburn said. “We’re displaced, like so many; but, we’re fortunate to have a place to stay at night and a warm bed to sleep in.”

When asked about his emotional response to everything that’s happened, and how he is dealing with the trauma and responsibilities, having lost his home and business, while simultaneously dealing with the monumental job of coordinating the city’s recovery efforts, Mayor Washburn said, “Well, it’s been trying. There have been some long days. I don’t think, during the first week, I slept longer than four hours any day. I was up a lot of times during the night writing a report to post on Facebook to keep the people informed about what was going on, which I consider a very important part of the government’s job.

“Also there have been a lot of meetings I’ve had to attend, to keep our City Board informed as to what we were working on and what the progress was. I consider that an important part of my job, as mayor, to keep the alderman apprised of the situation and to make proposals to them where we should head. But, whatever they do is up to them. As the chief executive officer of the city, it’s part of my job to provide that leadership for the board.”

“Currently, things have slowed down, and the emotional part of it and the stress has lessened,” Washburn said. “But, we’re still working to try to make things better for those who have lost their homes, for those who are displaced, and for those who are not as fortunate as many of us are.

“I still see a lot of trauma in small children and adults,” Washburn said. “When we had a storm warning New Year’s Eve and there was a chance of a tornado hitting our area once again, I saw a lot of fright, particularly in small children; so, our community has a need for mental health services.”

The mayor stated he foresees having therapy sessions for those that were in the heart of the storm, and for them to tell their stories. He envisions having a support group to help those affected to recover from post-traumatic stress disorder in the community.

When asked about the responsibilities and difficulties ahead, Mayor Washburn said, “There’s an old saying, ‘If you don’t want the job, you shouldn’t run for it.’ I ran for it, so, I’m going to do the best I can.”