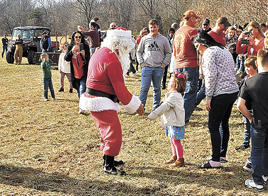 DRESDEN (December 23) – This year’s Christmas was brightened by the arrival of Santa riding into town on a helicopter before landing at The Elk’s Lodge in Dresden. The helicopter was piloted by Mike Rinker, and the event was organized by Tammy Erwin and Melanie Baker Jones in collaboration with Elk’s Lodge to spread holiday cheer in storm-damaged Dresden.

The original germination of the idea sprung from an incident in which a child asked Tammy how Santa would find their homes due to the destruction. Moved by this, she began trying to organize an event to re-energize children’s excitement and good will in the area. “No one has stuttered. No one has said ‘no’ to us.” What was hoped to be a small event expanded into an answered prayer for the Dresden community, as a massive influx of donations and volunteer contributions poured in to create a major event at Elk’s Lodge.

Champion Homes donated money to help families with rent. Jim Bondurant of Everett Stewart Airport brought Tammy in touch with Mike Rinker and brought the helicopter into the equation. TN Realtor’s Association brought gifts. Russ Finney acted as a mediator for Tammy and Elk’s Lodge, who very quickly donated as well as offered their space.

Tim Spence and his mother offered approval for the helicopter’s landing space. Even Hank Williams, having heard of the event, donated a couple toys for kids. All total, a rough approximate of $50,000 in toys was donated.

Santa, appearing on Elk’s Lodge’s lawn dapper and prepared, began greeting children immediately as he was led into the building. From there gifts were handed out and families took photographs with Mr. Claus. The massive overflow of donations will continue to be contributed to the community long after the event. Joining Santa as his helpers were the “Elk’s on the Shelf” who worked to distribute gifts to families as the event unfolded. “Angels on Earth. That’s what these people are,” Erwin shared.