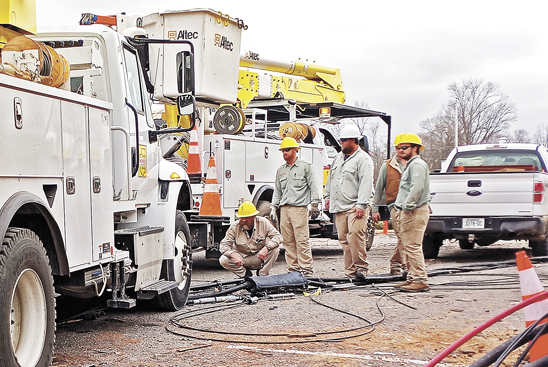 WCMES workers have been laboring steadily to repair electric lines and restore power to area homes and businesses.

WEAKLEY COUNTY (December 27) — Weakley County Municipal Electric System employees have been working diligently to repair electric lines and restore power to several thousand customers that were left in the dark, after powerful winds generated by an EF3 tornado tore through the region shortly before midnight on Friday, December 10.

An EF3 tornado, which is the third most intense tornado on the Enhanced Fujita Scale, will have a wind speed between 136 and 165 miles per hour, and the damage will be severe.

As a result of the devastating storm, many Weakley Countians lost their homes and businesses, in addition to their personal belongings.

“As far as we know, every residence that is in good enough condition to receive power has been connected since last Wednesday,” Collins said. He explained, once electrical repairs are deemed safe and approved by the electrical inspector, the power can be turned back on.

Neighboring electric companies that assisted Weakley County in making repairs during the first week after the tornado struck were: Carroll County Electric, Ripley Power and Light, Union City Energy Authority and Milan Department of Public Utilities. “We released them on December 18,” Collins said.

“If anybody is out of power, let us know; or if they see a pole that may be broken, that we might not know about, give us a call so we can check it out,” Collins advised. “We want to make those repairs before the power goes off.”

WCMES serves all of Weakley County, as well as the City of South Fulton, the City of Bradford, and rural northeast Gibson County. A total of about 20,500 customers are served from 12 substations through 1,767 miles of distribution lines. WCMES employs about 60 full-time and 10 part-time employees.