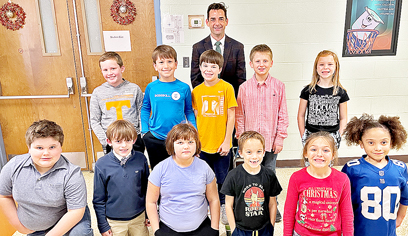 MARTIN (December 10) – A study on government resulted in campaign signs, speeches and a slate of new second-grade officials at Martin Primary School.

Students from each class selected running mates, created campaign slogans and signage, determined platforms, which included everything from promised Taco Tuesdays to keeping the school a kind place, and, once the primaries narrowed down the field, recorded campaign speeches. The speeches were shared between classes for the final vote.

Setting the tone on election day was Weakley County Mayor Jake Bynum, who spoke to the students gathered in the school cafeteria about what he called “the best job in the whole world.”

“And one reason that’s true is I get to talk to students like you,” he explained. He went on to address the types of tasks he does, ranging from answering questions and solving problems for residents to encouraging businesses to come to Tennessee. He even touched on taxes and how those help pay for the many services provided.

After a brief question-and-answer period with lots of engagement by the students, Bynum concluded with a response to whether it was hard to be a county mayor.

“Anything you enjoy doing is easy,” he said. “The work is difficult but most of the time I love what I do.”

Students who had campaigned with sweet treats and smiles were eager to hear the results which teacher Cooper announced.

“This unit was challenging with lots of new information,” she told the group. “You did a great job of running your campaigns and supporting your candidates.”

While the candidates were competing for president and vice president, all of them walked away with a role in the new government. Knox Bannon and Boone Hampton were named mayors. Bethany Brown and Owen Brewer are the new governors. Anazaria Thomas and Bethany Bennett are Supreme Court Justices; Wade Castleman and Cheyenne Spicer are now Senators. Colt Cooper and Norah Davidson claimed spots on the Cabinet. Grayson Tucker claimed the Vice President role and Bolton Brooks was declared President.

“The energy and excitement generated by this collaborative effort is inspiring,” said Principal Tracey Bell. “Without question learning was taking place while our students were also having fun. I’m also grateful for the parental and community support that made the effort such a success.”