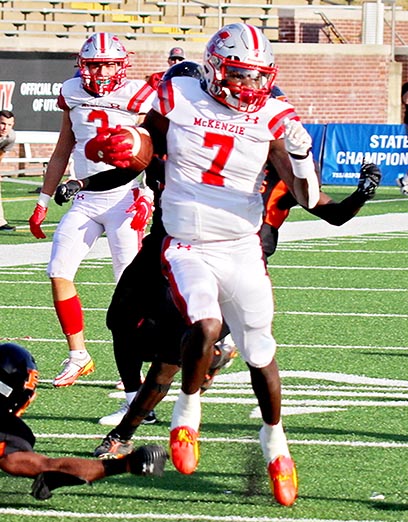 The McKenzie High School football team made it to the TSSAA state championship football game on Friday, where they faced off against South Pittsburg Friday in Chattanooga. The No. 1-ranked Rebels fell to the Pirates and became Class A runners-up of the state title.

After leading 14-0 in the first quarter of the Class A state football championship, the No. 1-ranked and unbeaten McKenzie Rebels looked to be on the express lane for their first state title.

Things slowly disintegrated for the Rebels as South Pittsburg scored 24 unanswered points and held on for 24-21 victory. It was the second time the Pirates had vanquished the Rebels in the state championship. McKenzie suffered a 52-20 loss to South Pitt in 2007 at Murfreesboro.

The Rebels’ hot start slowly cooled off and from the second quarter on, they experienced an uncharacteristically bad day. Two turnovers resulted in two South Pittsburg scores, a scoop and score and a field goal. McKenzie’s offense also was a bit inconsistent.

The Rebels appeared to be surging toward their dream of gold, but instead, the orange-and-black nightmare continued.

“We started out pretty good. We had a few things go our way and got a few breaks. We were executing pretty good there, too,” he said. “We didn’t execute very well there towards the end. We had a couple of opportunities inside their 30 a couple of times, but didn’t finish some drives and turned it over on downs.”

For a while, the two teams seemed to be measuring each other like boxers. The Rebels forced a South Pittsburg punt, the Rebels turned the ball over on downs, then with 1:57 left in the first, McKenzie stopped a Pirate drive and took over at its own 27. Junior Rebel quarterback Jackson Cassidy quickly found junior receiver Marquez Taylor for a 35-yard completion. On the next play, Cassidy located Zay Webber for a 48-yard touchdown pass. Zach Aird connected on the first of three extra points. In 19 seconds, McKenzie went 73 yards in two plays to lead 7-0 with 1:38 to play in the first.

It didn’t take long for the Rebels to ring the bell again. Two plays into South Pittsburg’s next drive, McKenzie’s Rashad McCreary picked off South Pitt quarterback Richard Hunter’s pass. The ball was tipped once at the line of scrimmage, then tipped by McCreary again before he came up with it at the South Pittsburg 40. Two plays later, Taylor galloped 27 yards to the end zone and the Rebels led 14-0 with :15 to play in the opening frame.

Things never would look so good again for the Rebels.

The Rebels drove down to the South Pitt 27 where they were stymied on downs, but McKenzie’s defense stopped South Pitt on its next possession. The Rebs couldn’t do much with the ball and McKenzie led 14-7 at intermission.

“Outside of that one drive, our defense played well,” Comer said. “We saw a lot of things that we hadn’t seen them do, so we made adjustments did pretty well.”

McKenzie took the ball to start the second half and struggled to run the ball. Offensive inconsistency began to slowly unravel the Rebels’ momentum. South Pittsburg forced a three-and-out, but McKenzie’s Etijay Tharpe picked off a pass at his own 8-yard line. Two plays later, South Pitt forced a fumble and Dezman McNeal scooped it and returned it 15 yards for the game-tying touchdown with 5:28 left in the third. From that point on, it seemed the game was incrementally slipping away from the Rebels.

Mid way through the fourth quarter, South Pittsburg took the lead. Kelly capped a five-play, 78-yard drive with a 28-yard touchdown run at the 7:53 mark of the fourth. South Pitt led 21-14. Things went from bad to worse on the next series for the Rebels.

South Pittsburg’s McNeal stripped McKenzie of the ball and the Pirates were in position to salt the game away. McKenzie kept them out of the end zone, but Keown did extend the margin to two scores with his 19-yard field goal with 3:01 to play, 24-14.

From there, the Rebel offense revived and streaked 68 yards in six plays, ending with Cassidy’s 15-yard scoring strike to Aird with 1:14 to play. The Rebels trailed 24-21. Recovering an onside kick would give them a shot.

But South Pitt covered the kick and ran out the clock.

“You can’t turn it over like we did. They had a scoop and score,” Comer said. “The other, we held them out of the end zone and forced a field.”

It was an exercise in frustration, coupled with bad breaks the Rebels hadn’t faced all year.

“The kids never quit playing hard. Sometimes the breaks don’t go your way,” said the coach. “We were able to sustain a drive and that gave us a chance if we could have gotten the onside kick.”

One of the encouraging things was that South Pittsburg resorted to a bit of gimmickery, suggesting it didn’t think it could line up conventionally with the Rebels and win.

“They were trying to get some offense generated, but we handled that pretty well on defense, made adjustments and we were able to get off the field.”

The Pirates captured their first state title in 11 years, their sixth overall and finish with a 13-2 record. McKenzie ends its campaign with a school-best 14-1 mark after making its second appearance in the Blue Cross Bowl.