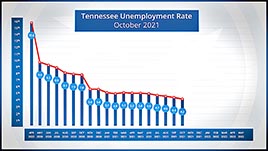 NASHVILLE – New data revealed the employment situation continued to improve for a majority of Tennessee’s counties in October 2021, according to the Department of Labor and Workforce Development.

The October jobless rates are less than 5.0 percent in 93 of Tennessee’s 95 Counties. Unemployment rates decreased in 65 counties during the month, while they remained the same in 20 counties, and increased in 10 counties.

Statewide unemployment was lower for the fifth consecutive month in Tennessee. The new seasonally adjusted rate of 4.2 percent was 0.2 of a percentage point less than October’s revised rate of 4.4 percent.

The employment situation also improved nationally. The United States unemployment rate for October was 4.6 percent, down 0.2 of a percentage point from the previous month.

Weakley County’s unemployment rate of 3.2 percent for the month of October remained unchanged from the previous month. It was 3.3 percent lower than October 2020’s jobless rate of 6.5 percent. The jobless rate was 1.4 percent lower than the national rate of 4.6 percent, and 1.0 percent less than the state average of 4.2 percent. Out of a total countywide labor force of 15,387 workers, 14,895 Weakley Countians were employed and 492 were unemployed.

Carroll County’s jobless rate was 3.7 percent for October, which represents an increase of 0.1 percent from the previous month’s rate of 3.6 percent, and a 4.1 percent decline in unemployment compared to October 2020. It was 0.9 percent below the national rate, but 0.5 percent lower than the state average. Out of a total countywide labor force of 11,826 workers, 11,385 were employed and 441 were unemployed.

Gibson County registered 3.4 percent unemployment for the month of October, which is 0.3 percent less than the previous month, and 4.3 percent below one year ago. The jobless rate was 1.2 percent lower than the national rate, and 0.8 percent below the state average. Out of a total countywide labor force of 21,517 workers, 20,782 were employed and 735 were unemployed.

Henry County recorded a jobless rate of 3.7 percent during October, which is 0.2 percent higher than September’s rate of 3.5 percent and 4.2 less than it was at the same time last year. Unemployment was 0.9 percent less than the national rate, and 0.5 below the state average. Out of a total countywide labor force of 13,341 workers, 12,853 were employed and 488 were unemployed.

At 3.8 percent, Obion County’s unemployment rate for October fell 0.2 percent from the previous month, and it was 4.5 less than in October 2020. Unemployment was 0.8 percent below the national average and 0.4 percent less than the state rate. Out of a total countywide labor force of 11,878 workers, 11,432 were employed and 446 were unemployed.

Tennessee employers added 6,800 non-farm jobs across the state between September and October. The manufacturing sector experienced the largest increase in jobs, followed by the professional and business services sector and the mining, logging, and construction sector.

Between October 2020 and October 2021, the number of nonfarm jobs across the state increased by 80,700. The leisure and hospitality sector accounted for the largest number of new jobs. The professional and business services sector saw the next highest increase, followed by the trade, transportation, and utilities sector.

While the state’s unemployment numbers continue to improve, many Tennesseans are still searching for meaningful employment. TDLWD offers a variety of services that can help job seekers land their next gig. From the more than 100 American Job Centers across the state to Jobs4TN.gov with its 420,000 job postings, that assistance is available online or in person. www.TNWorkReady.com is the site where all those services are listed and made easily available.