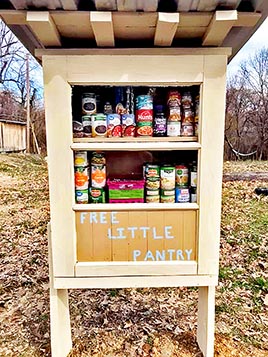 The Little Free Pantry, located at 410 Hillsboro St., Greenfield started as a way to give back to the community by Ashley Bryson and her husband. It has turned into a community effort where others stop by to add to the collection of non-perishable food items for community members in need to partake of.

Ashley Bryson, proprietor of Little Free Pantry found in Greenfield, freely expresses herself when speaking about others, but clams up when the subject falls on herself. This isn’t a contrivance, which it could easily be, and indeed humility is a virtue most are aware of but a minority practice. Ashley just very sincerely doesn’t see the subject being about her; when overviewing her life, the subject was about her students as an educator, or her children. When about the pantry, the subject is the community and those it helps. “I’m such a little piece. We built the pantry, and sometimes we fill it, but so often it is others that fill it up. I don’t see it as mine. I see it as the community’s.”

Ashley moved around when she was young, and considers her hometown Portland, Maine, where her stepfather was stationed in the military. She returned to Tennessee where her grandparents were in 2007, and has been here since. For eight years she was a high school Spanish teacher, teaching first for six years at Union City and then two at Westview. She saw teaching as an expression of giving, and for years she had contemplated a food pantry as another expression of giving, one she felt would be visible and healthy for her children, whom she homeschools, to see.

The pantry was built by Ashley and her husband using parts of a door, party of a bookshelf, metal roofing, and 2 x 6s. It was put up just before the beginning of the COVID lockdowns of 2020, and quickly it became an asset in the community. Ashley plants an overabundance in her garden so she can contribute from there to the pantry, as well as buys groceries for it. To the warmth of Ashley’s heart however, and something she is grateful for, the pantry is primarily supported by the community.

“The community contributes a lot. There is not one major contributor; it’s a bunch from a lot of sources.”

Now delay the eye roll, it’s there because it’s there in all of us, writer and readers included. It has been taught to us. Fight it this Christmas. This author has been gifted, to his surprise, to be a witness to extraordinary generosity. The food pantries scattered throughout Weakley County receive incredible contributions, supported by giving and loving people. Neighbor to neighbor, in spite of tumult, people are helping and loving each other.

The spirit of giving is alive, not a manifestation of a press in need of sap, nor a prayer of people who would like it to exist, but a living thing. The belief of giving is something very important to Ashley Bryson, as she herself told me, “This is the least I can do. I believe we can always give, no matter how much we have or how little we have, and I wanted that visible for my children.”