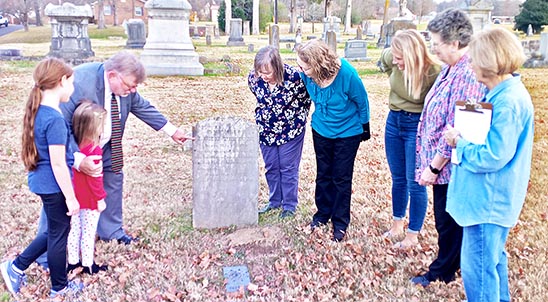 Dresden’s Sunset Cemetery has been added to the list of spots for the annual Wreaths Across America Day this month after community members gave above and beyond for sponsorships. Members of Sunset’s Cemetery Committee joined local Wreaths Across America coordinators to select graves of servicemembers for wreath placement. This served as a teachable moment for two local children, echoing the motto of WAA: Remember, Honor, Teach. On hand were (L to R) Liv Killebrew, Roane Bynum, Judge Tommy Moore, WAA coordinator Linda Smith, WAA co-coordinator Sue Priest, Kate Bynum, Carol Moore and Martha Killebrew.

MARTIN (December 3) — Locally, volunteers supporting Wreaths Across America (WAA) at Martin’s Eastside Cemetery have been working hard to ensure that as many of the more than 600 service members buried there will indeed be honored again this year with the placement of live, balsam veterans’ wreaths as part of National Wreaths Across America Day 2021. Now in the fourth year as a WAA location, all 600-plus veterans at Eastside Cemetery will be honored.

“Due to the outpouring of support from local businesses, organizations, and individuals,” stated Linda Smith, WAA Location Coordinator, “we not only reached this year’s goal of 650, but exceeded it.

Smith continued, “The history of service in northwest Tennessee is present just about everywhere you look. Over the past three years, this became even more apparent to me and the desire for WAA to spread through Weakley and Obion Counties surfaced.”

A review of the WAA website for Eastside Cemetery indicates 863 are currently sponsored. When asked what will happen to sponsorships over the necessary number for Eastside, Smith said, “We will share and we will save for next year.”

Explaining this, Smith indicated that sponsorships over those needed for a WAA cemetery’s set goal are held over for the next year. “However, after discussing my plan with the steering committee,” said Smith, “I requested additional wreaths. These wreaths will enable two other cemeteries in the area to become part of WAA.” The cemeteries joining the growing list of locations are Beulah Cemetery in Union City and Sunset Cemetery in Dresden.

Sunset Cemetery in Dresden has been part of the Iris Festival since 2000, as it is the site of the annual Cemetery Walk. The website for the 2021 Iris Festival holds this post, “Events that celebrate our history and inspire our future.”

“With missions to Remember, Honor, and Teach,” states Smith, “Sunset Cemetery and Dresden seem to fit.” More than 400 veterans are buried in Sunset Cemetery. Their history of service spans from the Revolutionary War and Civil War to World War I and II and into the present. Others such as Ned Ray McWherter, the 46th Governor of Tennessee and Finis James Garrett, US Congressman, provided service to this state and country in other ways.

The first person from Weakley County to join the United States Army during World War I, Herbert Jones, is also among those buried at Sunset. Jones was the first Weakley Countian injured during the war, and later died in service. He was awarded the Distinguished Service Cross and the Croix de Guerre, the French War Cross. Jones was sent to train with the French in artillery. He died July 4, 1918. He was buried in France, and three years later, his body was returned to its final resting place in Sunset Cemetery. It is believed his memorial service was one of the largest attended at Dresden Methodist Church.

As a WAA location, these individuals will be remembered and honored. In doing so, the opportunity for teaching exists.

According to Smith, an expansion of individuals who comprise the local WAA steering committee increased the number of individuals, businesses, and organizations who are directly involved with this location. “This increased the number of people spreading the word in the area, as well as assisting with marketing and obtaining sponsorships,” said Smith. Two members of the steering committee will serve along with Smith as co-coordinators for new locations.

“This entire group of individuals provided support and encouragement, and truly helped get us to and beyond the set goal. I don’t think that we would be in this position at this time without them,” Smith stated. Members of the steering committee include representatives from American Legion Post #55-Martin, Rolling Thunder TN-6, Everett-Stewart Composite Squadron of Civil Air Patrol, Reelfoot Chapter of the Daughters of the American Revolution, Central Christian Academy, Crank’d Up Garage of Martin – Bryan and Melinda Bray, and other community members.

The National WAA Day this year is December 18. This ceremony will begin at Eastside Cemetery in Martin at 11 a.m. This will coincide with the ceremony at Arlington National Cemetery. At approximately 12:30 p.m., Sue Priest, a Coast Guard veteran, and co-coordinator, will arrive at Sunset Cemetery to lay wreaths on more than 30 veterans’ graves.

“While it won’t be possible to place a wreath on all veterans’ graves in Sunset this year,” said Priest, “my goal is to be able to honor all veterans at Sunset in 2022.”

This year, the ceremonies that are held across the country at more than 3,000 participating locations, continue to look a little different. The national nonprofit is continuing to make every effort to meet CDC recommended safety guidelines while also adhering to state, local, and cemetery safety measures that have been implemented due to COVID-19. “At all three cemeteries, we are asking everyone to follow local guidelines and to be respectful of others,” stated Smith.

Although not absolutely necessary, those interested in participating in this year’s wreath placement are encouraged to register to volunteer so that they can be kept up-to-date on details for the day as it gets closer. To register to volunteer, go to www.wreathsacrossamerica.org/TNECMT. Prior to the ceremony volunteers are needed on Saturday, December 11 from 9-10 a.m. to help mark veterans’ gravesites with flags. According to Smith, this is done to assist those laying wreaths locate a veteran’s gravesite with greater ease.

To sponsor a wreath and stay informed about event details, visit www.WreathsAcrossAmerica.org/TNECMT. Sponsorships may occur throughout the year using this site. Additional activities and contact information are also present.