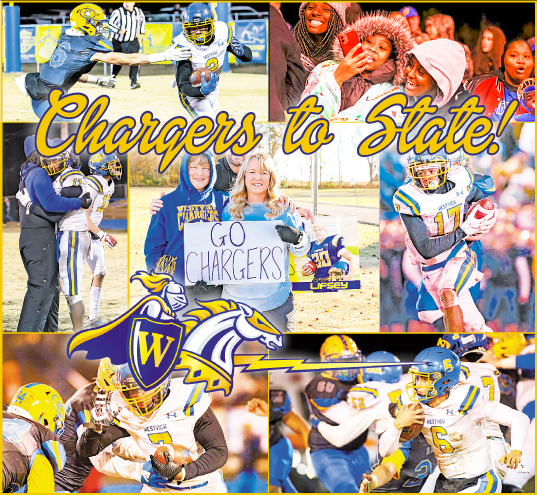 MARTIN (November 30) – Martin-Westview hopes the second time is a charm this Saturday.

For the second time in school history, the Chargers will be playing for the Class 2A state championship. In 2001, the Chargers, featuring the likes of P.R. Wilson and Justin Harrell, who wound up playing in the NFL alongside another former Westview Charger and Tennessee Vol Chad Clifton at Green Bay, defeated McKenzie in the semifinals 35-0, but fell 14-0 to Goodpasture in Murfreesboro in the championship.

To be sure, it’s an exciting time for both schools, as reflected by both coaches in their digital press conference Tuesday.

Hampton was so stoked about earning a championship bid, fans pulled their pickup trucks on the field and, using chains, pulled down the goal posts.

“It’s exciting for us. It’s our first time to be in the state championship game,” said Hampton coach Michael Lunsford. “We’re a small community and a tight-knit group, so we’re excited.”

Westview coach Jarod Neal said he and his team savored the opportunity to be playing in the Blue Cross Bowl. Neal’s team has had a pretty impressive run. The Chargers have displayed fight and determination and aren’t a one-trick pony, like so many believe. It’s not just the Ty Simpson Show at quarterback.

From the beginning of the season, it became apparent that the Chargers had a healthy running game and was quite proficient on defense. Dearca Nicholson and Javion Goins, among others, have made significant contributions.

Simpson, however, is a prodigy, having committed to Alabama earlier this year. He’s having the best year of his career. Yes, he’s an elite passer, but he has made a different kind of impact.

“(He’s) one of those where he is a special athlete. He makes plays in practice where you say ‘whoa!” then he’ll make a bonehead play and you have to reel him back in,” Neal said. “But having a caliber player like that helps the whole team.”

Neal also has another asset on his team. Former head coach Don Coady has returned to help the Chargers. He was the coach who led Westview to the 2001 championship.

“Coach Coady has been a big help all over the place, offense, defense, special teams and the wealth of knowledge of being a coach for 25 years year, has helped us,” Neal said.

Lunsford said dealing with Simpson and the Westview offense will be a challenge.

Neal observed Hampton’s challenges as well. “Hampton runs the football well, downhill with big backs and big linemen. We have to hold the line of scrimmage, let the cavalry finish it off.”

Lunsford said his dad guided Cloudland as head coach to the state championship round in 2001, so his tutelage has been beneficial. But Hampton seemed to struggle to find its offensive identity, and seemed to hit its stride once November arrived.

“We were fortunate enough to improve once the playoff started. We didn’t know our identity early, but we’ve been able to run a number of things on offense, so nothing really surprises us,” Lunsford said. “But we’ve improved through the playoffs and we’ve figured out how to get things done.”

Perhaps a pivotal moment in Westview’s season was the loss at Trenton-Peabody. The Chargers drove the length of the field and scored with 1:42 to play when Simpson located Omarion Harris for the go-ahead score, 29-28. Peabody countered with a length-of-field drive that ended when kicker Chase Minton booted an 18-yard field goal at the final horn for the 31-29 victory, preserving then a 38-game winning streak.

“We fought. In the past, we’d get down a score or two, it was over,” said Neal. “This year we were able to come back. The fight we showed in that game carried us through the rest of the season.”

Neal said he expects Hampton to do what other teams have done against them, try to run the ball, burn off clock and keep Simpson and the Charger offense off the field.

“Teams have tried to run the ball and milk the clock. That’s something we’re aware of,” Neal said. “It’s something our defensive staff and our offense know. We just have to do what we have to do to get the best opportunity.”