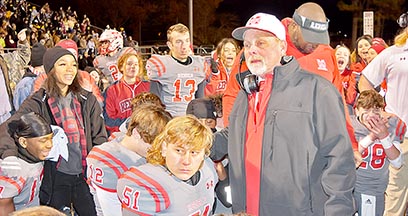 The McKenzie High School Rebel Football team is traveling to Chattanooga this Friday after the team defeated Trenton Peabody in the fourth round of the TSSAA state football playoffs Friday night. McKenzie takes on South Pittsburgh in the state championship. Game time is 2 p.m. Friday, December 3. Photo by Ron Pakr/Carroll County Newsleader

When McKenzie junior defensive back Zach Aird emerged from the back corner of the end zone with an interception on the last play of the game, one dynasty may have ended, another may be just beginning.

No. 1-ranked McKenzie edged No. 2-ranked and three-time defending state 2A champion Trenton-Peabody 36-30 to earn the school’s second trip the Class A state championship. The Rebels will face old nemesis South Pittsburg 2 p.m. (CST) Friday, December 3 at Chattanooga’s Finley Stadium, home of the Tennessee-Chattanooga Mocs. South Pitt beat Cloudland 30-22 in the other semifinal.

In a game where the two teams combined for 66 points and 715 yards, McKenzie’s defense stepped up when it had to. MHS also benefited from a bit of luck as well. The Rebels punted the ball to Peabody with just 4:08 to play and clinging to a six-point lead. On the first play of the Golden Tide’s drive, 2020 Class 2A Mr. Football winner, and Class A finalist Khalik Ganaway squirted through the left side for a 51-yard gain down to the Rebel 29. A holding call nullified the play and the Tide began again from its own 26.

From there, Peabody meticulously worked its way down to the Rebel 17. A procedure call backed it up to the 22. With 1:46 to play, Ganaway was stuck for a yard gain, then no gain when the Tide called its last time out. Peabody quarterback Sam Driggers set up to pass, rolled to his right, but was sacked by David Chaney with about :20 to play. The Tide got to the line of scrimmage with :12 to play and set up for one last Hail Mary pass.

Driggers avoided a rush, stepped up and heaved it to the back-left corner of the end zone where Aird picked it off and the home crowd erupted. McKenzie ended Peabody’s quest for a four-peat.

“We made plays. We knew they were explosive, they were going to put up points,” said a teary-eyed McKenzie coach Wade Comer, who has guided his team to the semifinal round seven times since 2001. “We executed well, stepped up and made plays when we had to.”

For the second week in a row, the Rebels had vanquished a defending state champ. Last week, McKenzie capsized Fayetteville’s hopes of a 1A repeat and then Friday, upended the Tide.

This was the shootout people expected, however. McKenzie implemented the big play while Peabody was more methodical, or the most part, in an attempt to keep the Rebel offense off the field.

McKenzie scored on its first possession when junior quarterback Jackson Cassidy hit Marquez Taylor for the first of two TD passes. This combo covered 33 yards at the 8:09 mark. Aird booted the first of his three PAT kicks and the Rebels led 7-0. That quickly changed when Driggers hooked up with Ganaway for 69 yards on the second play of Peabody’s next possession. Chase Minton hit the first of his three extra points to tie the game at 7 with 7:05 to play.

The Tide briefly took the lead with 2:23 to play in the first when Driggers hit the rangey Derek Kee in the right corner of the end zone. Peabody led 14-7. It didn’t take long for the Rebels to score. Jackson worked his way out of trouble, stepped up in the pocket and connected with a wide-open Taylor, who almost had to wait for gravity to do its job with the ball. When he caught it, he galloped to the end zone for a 61-yard strike. MHS tied the game at 14. Cassidy was 5-10 for 157 passing yards, Taylor 145 receiving yards on three catches.

The Rebels marched 65 yards in nine plays to open the second quarter when Taylor scored his third TD of the night, this time on a 21-yard run with 7:33 to play. The extra point was blocked, but the Rebels led 20-14. They would not trail again in this game.

McKenzie benefited once again from good fortune. The Tide tried to fake a punt, backed up on its own 18, but the pass was batted down at midfield. The Rebels took over, but had to settle for a 39-yard field goal by Aird with 3:30 to play, a kick that would prove to be a huge difference later. Peabody wouldn’t be denied as Driggers connected with Gunner Haney for 25 yards, then let Ganaway take it himself for a 45-yard TD run with 2:42 to play. The Tide trailed 23-20.

Peabody had one more chance to cut into the Rebel lead before the half, but Cassidy picked off Driggers to send both teams to the locker room. Defensively, Cassidy had nine tackles, two for loss, and an interception.

“Jackson and Marquez and the O-line, executed well,” said Comer of his team’s offensive acumen. “We knew we had to put up points tonight. Jackson ran the ball well, Rashad (McCreary) ran the ball well and Marquez got all his yards. They are good athletes and used their eyes very well.”

The Rebels won the pre-game toss and deferred possession until the second half. Peabody tried an onside kick, but it rolled out of bounds, giving McKenzie possession at the Tide 47. The drive sputtered and McKenzie’s punt was muffed at the Tide 19 where McKenzie took over. Three plays later, Taylor sprinted for another score with 8:24 left in the third. The Rebels led 29-20 when the two-point conversion failed.

The Tide recoiled and drove 34 yards in seven plays. Driggers burst through for the touchdown with 5:05 to play in the third to draw the Tide within two, 29-27. The Rebels answered with an 11-play, 65-yard drive, culminating with Taylor’s 3-yard surge with :18 to play in the third. McKenzie led 36-27.

Peabody drove 13 plays to the Rebel 5, but McKenzie’s defense forced a 22-yard field goal by Minton with 5:34 remaining in regulation, making it a one-score game. Visions of last year’s final four seconds in the 2A quarterfinal double-overtime loss at Peabody hovered over Rebelnation like a dark cloud, but limiting the Tide to three points was a bit of a victory for the defense.

McKenzie punted back to Peabody with 4:01 to play and the Rebels dramatically held on for the victory.

“We matched up well with them, I thought, but they have a heck of a football team,” Comer said. “It was a blessing to win it.”

The Tide outgained the Rebels 402-313 and snapped the ball 15 more times than McKenzie, 61-46. McKenzie was balanced, throwing for 157 and running for 156. Taylor had 16 carries for 69 yards and three touchdowns. Cassidy carried 12 times for 51 while McCreary had five totes for 36 yards.

Driggers was 7-16 passing for 164 yards, two touchdowns and two interceptions. Ganaway had 25 carries for 147 yards and a touchdown to lead the Golden Tied.

“Tonight was special. We worked hard from Day One in the off-season,” Comer said, suggesting this was a game the Rebels had circled for 53 weeks. “We had (signs that read) four seconds put up on the wall there from last year and they got the opportunity and took advantage of it.”

McKenzie enters the state title game at a school-best 14-0. South Pittsburg enters the game at 12-2.