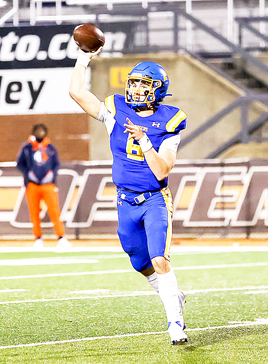 Westview High School’s senior quarterback Ty Simpson is making quite a name for himself in his high school football career after a most recent announcement was made last week. Simpson has been selected to play in the All-American Bowl that will be held on January 8, 2022, in Alamodome, San Antonio, Texas and will air on NBC.

High school players from all over the United States were selected to play in the bowl for the East or West team. Players are chosen based on their performance on and off the field. For 20 years, the All-American Bowl features 100 high school senior football players.

Simpson will be the only Tennessee player on the 2022 West team and will serve in the position of quarterback. Others from Tennessee will be on the 2022 East team, including Jordan James from Oakland High School and Keaten Wade of Summit High School.

This announcement follows the recent news of Simpson chosen as a Tennessee Titans Mr. Football semifinalist.

The All-American Bowl was originally created and owned by All American Games, led by Douglas Berman, and was the first national high school football all-star game to ever be played when it kicked off at Highlander Stadium in Dallas, Texas on December 30, 2000. The event relocated to San Antonio the following year and has been played inside the Alamodome since 2003. In 2019, NBC Sports acquired the event from All American Games and now fully owns and operates the All-American Bowl.

Simpson is the son of Jason and Julie Simpson of Martin. Jason Simpson coaches the University of Tennessee at Martin Skyhawk football team.