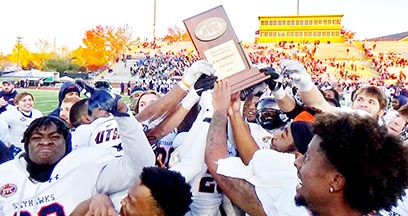 The UT Martin Skyhawk football team was crowned the Ohio Valley Conference champions Saturday after it defeated Tennessee Tech in Cookeville by a score of 42-3. This is the first time the team has claimed the title in 15 years. Days later, the Skyhawks jumped to No. 8 in a national poll.

COOKEVILLE (November 13) – For the first time in 15 years, the No. 10 ranked University of Tennessee at Martin football team has been crowned Ohio Valley Conference champions after stringing together a program-record nine straight victories with a 42-3 win over league foe Tennessee Tech on Saturday.

The Skyhawks (9-1, 5-0 OVC) reached the mountain top of the league standings after several near misses in recent history to earn the program’s second OVC regular season championship and first since 2006. UT Martin’s historic season continues to write new chapters as the team picked up its ninth consecutive win on the afternoon to set a new program record while ranking as the second-longest winning streak in the nation. Along with the league title, the Skyhawks have guarantee an automatic berth in the FCS Playoffs for team’s second appearance in program history.

In addition to claiming the program’s second OVC trophy, the Skyhawks secured the rights to a second trophy with today’s victory. With the win over Tennessee Tech, UT Martin swept the Sgt. York Trophy series for the year with a perfect 3-0 record. The Skyhawks have claimed at least a share of the trophy seven times in the last eight years and nine times overall while the traveling trophy will make its home in west Tennessee for the first time since the 2016 season.

“Today was a great day for our program,” UT Martin head coach Jason Simpson said. “It’s been nine weeks in a row for that team to keep it going with the energy and focus. I take my hat off to them and the staff. They are ready every week and that doesn’t happen a whole lot. To be a part of that, I am very proud for our program and our fans. The defense came out tonight and did a great job while the offense kind of took the air out of it a little bit and got the big lead at halftime to put the game away early. Championships are hard to come by. We have won a lot of games around here but we have finished second too many times. To be able to see these kids celebrate is really satisfying.”

Just days after winning the Ohio Valley Conference championship for the first time since 2006, the University of Tennessee at Martin football accomplished another feat not seen in 15 years by claiming the No. 8 ranking in the latest AFCA FCS Coaches’ Top 25. Meanwhile, the Skyhawks remained at No. 13 in the Stats Perform FCS Top 25 poll.

UT Martin has only been ranked as high as No. 8 one time previously in the program’s history back on Nov. 6, 2006. The Skyhawks bumped up two spots in the Coaches’ Poll after a dominant 42-3 road victory over Tennessee Tech to secure both the outright OVC title and an FCS Playoff berth for the second time in program history. The win pushed the team’s winning streak to nine games to set a new program record and rank as the second-longest active streak nationally.

UT Martin will now shift its focus to the regular season finale with a trip to OVC rival Southeast Missouri this weekend on Saturday, November 20. Kickoff from Houck Stadium is scheduled for 1 p.m.