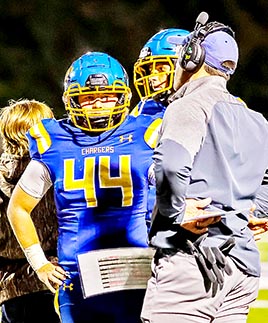 Westview Charger linebacker Bryce McGuffin picked off a pass during Friday’s match-up against Fairley at UT Martin’s Hardy Graham Stadium in the second round of the TSSAA playoffs. Photo by Christel Laney

Charger Drew Shanklin doubles as the team’s wide receiver and safety. He picked off a pass on defense during Friday night’s match-up against Fairley in the second round of the TSSAA playoffs. Photo by Christel Laney 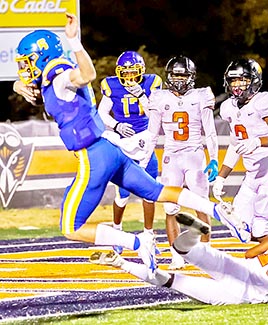 MARTIN (November 12) – The Westview Charger football team continues to advance in the TSSAA playoffs after it held Fairley Friday night at Hardy Graham stadium. This was the second round of the Class AA playoffs. Mr. Football semifinalist and senior quarterback Ty Simpson connected four times with his offense to haul in four touchdowns. Simpson also ran one in.

Westview and Fairley were tied up at the end of the first quarter, 6-6. From there, Westview managed to hold its opponent to only one more score by the end of the second quarter, and the defense capitalized on fumbles and interceptions. At halftime, Westview lead Fairley 27-12. By the end of the third quarter, Westview picked up two additional touchdowns while holding Fairley to only 12 points. The Chargers picked up one more touchdown and extra point in the fourth quarter, bringing the final score to 47-12. Westview advances to the quarterfinals this weekend when the Chargers host Memphis Academy of Health Sciences Friday, November 19. Tickets are on sale for Friday’s game through the Go Fan app at $9.40 (including tax). Fans can purchase tickets at the gate for $10 (cash only).