Twelve teams of middle school and high school students, the largest number competing since the DPA first hosted in 2017, were given $500 to purchase the canned goods required and three hours to build a previously-designed, themed construction. Teams were allowed to have can drives and fundraisers to purchase more cans.

DHS STEM Club received Honorable Mention for Best Meal, meaning the items used in the construction of the structure students named “25 Cent Wish” have the potential for providing the best full meal for families.

Advisor Rachel Abbott said the concept is a gumball machine made of 670 canned food items. The description of the structure notes that the students chose the theme based on their memories as children of placing a quarter in the machine slot and wishing for a blue gumball out of all the others.

Abbott noted, “This is the first event that the DHS STEM Club has participated in. We’re excited about how it turned out and are looking forward to many more events together!”

Advisor Laura Sterrett explains that included with the chance to compete and address hunger comes students’ hands-on opportunities to lean into 3D visualization.

“You have to use the cans for color and to show dimension. Using the size and the shape of the cans in a 3D order is actually pretty challenging,” she said.

The sculptures will be on display at Discovery Park for one month and then the cans will be distributed to food-based charities in Weakley, Obion, and Dyer Counties.

The DPA event is sponsored by Carol and Bill Latimer, Ben E. Keith Foods, Westan Insurance Group and Forcum Lannom Materials. Canstruction® is an international charity competition where architects, engineers, students, and others compete by building structures out of canned food. Founded in 1992 by the late Cheri Melillo and her colleagues from the Society for Design Administration, the first official competition was held in November 1993. Since then, over 50 million pounds of food have been donated. 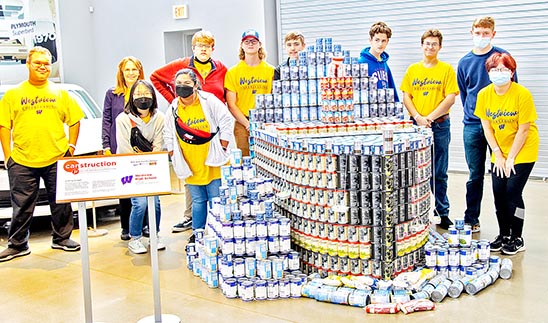