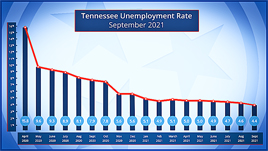 NASHVILLE  (October 28) — New data from the Department of Labor and Workforce Development (TDLWD) shows Tennessee’s statewide unemployment rate dropped for the fourth consecutive month in September, decreasing from 4.6 percent in September to 4.4 percent.

September’s rate is 0.2 of a percentage point lower than the previous month’s rate of 4.6 percent. Over the past year, Tennessee’s seasonally adjusted unemployment rate has decreased 3.5 percentage points from 7.9 percent to 4.4 percent.

Eighty-eight of the state’s 95 counties experienced lower unemployment during the month. Rates increased in six counties in September and remained the same in one county.

Unemployment Down in Weakley and Neighboring Counties

Weakley County’s unemployment rate of 3.2 percent for the month of September was down 0.9 percent from August’s rate of 4.1 percent, and it was 2.3 percent lower than September 2020’s jobless rate of 5.5 percent. It was 1.4 percent lower than the national rate of 4.6 percent, and 0.3 percent less than the state average of 3.5 percent. Out of a total countywide labor force of 15,346 workers, 14,848 Weakley Countians were employed and 498 were unemployed.

Carroll County’s jobless rate was 3.7 percent for September, which represents a decrease of 0.7 percent from the previous month’s rate of 4.4 percent, and a 2.5 percent decline in unemployment from September 2020. It was 0.9 percent below the national rate, but 0.2 percent higher than the state average. Out of a total countywide labor force of 11,765 workers, 11,335 were employed and 430 were unemployed.

Gibson County registered 3.7 percent unemployment for the month of September, which is 0.7 percent less than the previous month, and 3.0 percent below one year ago. The jobless rate was 0.9 percent lower than the national rate, and 0.2 percent above the state average. Out of a total countywide labor force of 21,454 workers, 20,670 were employed and 784 were unemployed.

Henry County recorded a jobless rate of 3.5 percent during September, which is 0.7 percent lower than August’s rate of 4.2 percent and 3.1 less than it was at the same time last year. Unemployment was 1.1 percent less than the national rate, and equal to the state average of 3.5. Out of a total countywide labor force of 13,336 workers, 12,864 were employed and 472 were unemployed.

At 4.0 percent, Obion County’s unemployment rate for September fell 0.9 percent from the previous month, and it was 2.6 less than in September 2020. Unemployment was 0.6 percent below the national average, but 0.5 percent more than the state rate. Out of a total countywide labor force of 11,885 workers, 11,408 were employed and 477 were unemployed.

Total non-farm employment decreased by 5,200 jobs between September and September. The largest decreases were in the administrative, support, and waste services sector, followed by the construction and durable goods manufacturing sectors.

Between September 2020 and September 2021, nonfarm employment increased by 96,100 jobs across Tennessee. The largest increases occurred in the professional and business services sector, along with the leisure and hospitality and the trade, transportation, and utilities sectors.

While the jobless situation continues to improve, many Tennesseans are still searching for meaningful employment. TDLWD has many resources available to help individuals navigate the more than 540,000 open positions in and around the state, as well as locate opportunities to improve skill sets or learn new, in-demand skills. Job seekers can find those resources at www.TNWorkReady.com.