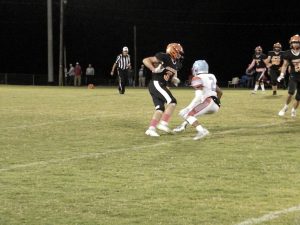 GREENFIELD (October 22) – The Greenfield High School Yellowjackets hosted the Gibson County Pioneers for the Jackets’ final non-region game of the season. This football game was not only senior night for the Yellowjackets but also Pink Out night.

The game began with Gibson County winning the coin toss and deferring to the second half of the game. This led to the Jackets beginning the game with the ball. But the Jackets had to give the ball to Gibson County and the Pioneers made quick work down the field before getting a touchdown. That, with the extra two points, brought the game to 8-0. Greenfield received the ball on the 49-yard line where quarterback Craig Ross threw long to Matt Scates, who ran to the Pioneers’ nine-yard line. The Jackets followed with a touchdown by Hayden Smith. The Jackets attempted a fake-out by appearing to kick for the extra point, but instead threw for the extra two points. This technique did not work however, and the Jackets were behind by two points at the end of the first quarter with Gibson County leading 8-6.

The second quarter began with Gibson County being pushed back five yards from the line by O’Marion Miles. The Jackets received the ball but after an incomplete throw to Matt Scates, the Jackets handed the ball back to Gibson County.

The Pioneers made another touchdown after a long pass to bring the score to 14-6, unable to make their additional two points. But during this touchdown play, Gibson County got called for unsportsmanlike conduct. This flag resulted in the penalty being used against the Pioneers during the team’s punt off, putting Greenfield in a better position.

Greenfield began on the 50-yard line, due to the penalty on Gibson County for the kick-off. The Jackets then made their way down the field where Hayden Smith made a 14-yard run and Matt Scates made a catch in the endzone for the Jackets’ touchdown. The Jackets were unable to make the additional two points and brought the game to 14-12 going into the halftime.

There was a special halftime performance by Greenfield’s Little Spirits, who were led by Johnna Taylor, teacher and Greenfield Junior High School cheerleading coach.

Gibson County received the ball in the second half of the game and quickly made another touchdown early on to have the score 20-12. The Jackets slowly went down the field, led by Chase Simmons and Hayden Smith, Smith running for 28 yards. The Jackets were able to make good headway towards a touchdown despite multiple penalties, it was Hayden Smith who made the touchdown from the one-yard line.

The Jackets were able to receive the ball again after a fumble by Gibson County. The fourth quarter was full of fumbles as Greenfield fumbled and recovered their own ball not soon after receiving it. But they were not fortunate the second time as they fumbled again for Gibson County to recover. The Pioneers, after two plays, fumbled and recovered the ball but they would not have the ball long as the Gibson County quarterback threw an interception to Matt Scates, who caught the ball in the Pioneers’ end zone.

What seemed like the Jackets would be able to make the plays needed, Greenfield threw an interception which the Pioneers then turned into a touchdown soon after. This brought the score to 26-18.

The clock was running low and Greenfield’s only hope was to tie the game at 26 with a touchdown and two-point conversion, which the Jackets had failed to score the whole game. The Jackets were within five yards of a touchdown and made the touchdown as the time clock hit zero. The team prepared for a two-point conversion, but it was no good which left the game ending in regulation and Gibson County walking away with 26-24.

The Jackets will not continue past the regular season this year and play their final game for the year away at Lake County.

Head Coach Don Pitt said after the game that while this season had been very challenging for many reasons, he was proud of what the team was able to do. He also went on to say he wanted to thank the seniors and their families for all of the many years of hard work and support for the Yellowjackets’ football program.