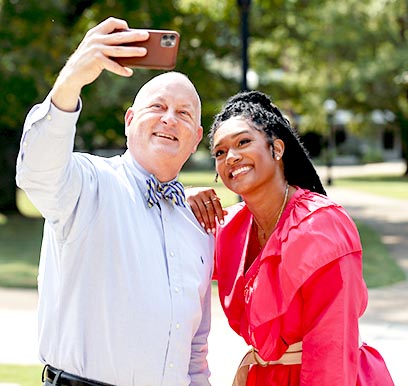 MARTIN (October 9) – Martin, Tennessee, has an enormous amount of space. Space, specifically land, is a valuable asset that nonetheless can be seen through different lenses. For the many farmers and workers in Weakley County, it’s the promise of work and happiness. For others, and they range from the artists to the businessmen to even the nurses, it’s hills and stars as interesting as those paintings you see in your doctor’s office. In those hills and stars that span for miles, stretching out into Kentucky and Missouri and across Tennessee, you can sit down and dream of different worlds; maybe for fun you dream of Mars, or maybe for a career, you dream of Hollywood.

It’s editorial conjecture to say Crystal Hayslett; star of “Sistas,” confidant to superstar Tyler Perry, and 2006 UT Martin alumna dreamt while looking at Martin’s enormous space; but her success certainly makes her a torch bearer for those who do.

“Yeah, you know, it’s a lot of hard work. People see the glitz and glamour, but they don’t see the hard work that goes behind it. Be ready. Be ready to put the work in. You know people who make it, they didn’t make it just by going, ‘I hope somebody finds me.’ No, it’s a lot of hard work. It takes guts, and you have to be ready for rejection because you’re gonna be told ‘no’ a lot,” Hayslett shared.

Hayslett returned to Martin in September 2021, and was later the recipient of the 2021 Outstanding Young Alumni Award, which honors a university alum under 40 years of age for outstanding achievement in his or her chosen profession, during UT Martin’s recent Homecoming, although she was unable to attend. She graduated UTM in 2006 with a Bachelor’s degree in University Studies.

A Westview High School graduate, Hayslett’s only experience in linearity has been in success. Her life took her to interning with Senator Lamar Alexander, sidetracking her pursuit of the arts for a time. She then went to Atlanta, Georgia, to pursue music, but skills she honed in boutiques and design led her to being a member of the wardrobe department at Tyler Perry Studios. Beginning as an entry-level production assistant in 2012, she worked her way through the ranks until, inevitably, she became Perry’s stylist.

“He can be watching CNN and be like, ‘Hey, find these people. I want to buy them a new home.’ Like, literally on his couch. Dude, I want to do that when I grow up,” Hayslett said of working alongside Tyler Perry.

Now Hayslett can add being a leading lady to her credits of achievement, starring on BET channel’s “Sistas.” The popularity of her paralegal character, Fatima, led her from guest status to lead in season two, and the onward march of her popularity in the real world continues.

Home is home, however, and she will never forget Martin. In her return last month, she expressed this sentiment, “I’m just happy to be home and so excited to be back at UTM, seeing how everything has developed. Some things are exactly how I left them, so that’s awesome, too. I love it.”

Hayslett is the daughter of Jerry and Anita Hayslett of Martin. Her father accepted the 2021 Outstanding Young Alumni Award on October 9 at UTM on her behalf.