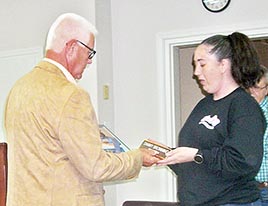 Gleason Mayor Charles Anderson presents Kim Healy, who is the wife of the late Alderman Danny Browning, with a framed photo and his nameplate.

GLEASON (October 18) — Monday night’s Gleason City Board meeting was somewhat somber, due to the passing of Alderman Danny Browning, whose life was cut short, due to the COVID-19 virus.

A moment of silence was offered for Browning. The absence of the Alderman was much more profound as Browning’s empty chair sat adorned with a black bow, a photo, and his nameplate.

Mayor Charles Anderson stated Browning, who died October 5, 2021, served the city of Gleason with distinction and with pride. The mayor noted Browning served as alderman and vice mayor for nine months and 28 days. As far as anyone knows, Browning is the only Alderman in Gleason’s history to have passed away while in office.

Mayor Anderson spoke of Browning’s service and his personal friendship saying, “I was proud to serve with Danny. Danny was a very wise man and always gave me good advice. Danny loved life and looked for the best in everyone he met. He always seemed to be in a good, jovial mood.” Anderson smiled as he added, “Danny always respected his hometown of Greenfield and, also, his second hometown of Gleason. Every time we parted, he’d say, ‘God bless you brother.’”

As a final nod to the Alderman, Mayor Anderson said, “No one will ever take Danny’s place in life. Danny will be dearly missed. Danny Browning, rest in peace.”

Following this heartfelt tribute, Alderman Browning’s nameplate was retired. It, along with a photo of Browning, were given to Browning’s grieving widow, Kim Healy.

Police Chief Brian Legons announced Gleason Police Department will host a Trunk-or-Treat in the downtown area on October 30 from 5-7 p.m. Legons stated the department has reached out to local businesses and churches for donations and he is expecting a good turnout for the first annual event. Chief Legons also said, “This Friday at 8:30 a.m., we’re having a ribbon-cutting for our drug takeback box donated by the prevention coalition.”

Mayor Anderson introduced Clay Wright as an apprentice water superintendent to Water Department Superintendent Tony Terrell. Wright is a recent graduate of UT Martin with a degree in natural resources. Anderson stated, under the apprentice program, the city will be reimbursed half of Wright’s salary for the first 300 hours of work, and pay for all of his courses for certification. “It will take about two years for him to become fully certified, and his pay will be increased as he earns his certification,” Anderson said. “We’re happy to have Clay on board. He is the future son-in-law of City Attorney Beau Pemberton.”

Public Works Director Rodney Garner and Fire Chief Mark Stafford submitted written reports and stood ready to answer any questions by the board, but there was no discussion regarding either of these departments.

It was announced there will be a Park Committee meeting at Gleason City Hall on Monday, October 25 at 6:30 p.m.

A Library Committee meeting will take place (today) Wednesday, October 20, beginning at 5:30 p.m. “We will appoint a library chairman and discuss how to recruit a librarian,” he said.

Mayor Anderson read a statement regarding the regulations for filling an alderman’s seat to complete the alderman’s term in office. “According to the city charter and Weakley County Election Commission, when there’s a vacancy of an elected alderman, a new alderman must be nominated for approval by the board within 30 days of the vacancy.” Mayor Anderson stated a special-called meeting will be held sometime prior to the board’s November meeting with the time and date to be determined and publicized.

Mayor Anderson also announced there will be a Chamber of Commerce a ribbon cutting for a new business, Gleason Flowers and Market, at 10 a.m. on Friday, October 22. The new business is located adjacent to Simply Southern.