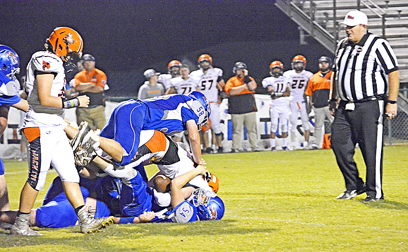 TACKLE – Central’s Gavin Johnson, Ryan Eubanks, and others bring down a Greenfield Yellowjacket runner during the Tigers’ loss to the Yellowjackets Friday night at Hollow Rock-Bruceton. Photo by Ron Park/Magic Valley Publishing

HOLLOW ROCK (October 8) – The Hollow Rock-Bruceton Central Tigers remain winless for the season after a 46-0 homecoming loss to the Greenfield Yellowjackets in a non-region game Friday night at Joe T. Herndon Stadium.

After starting the season with a promising showing against a strong West Carroll team, the Tigers have since struggled with a serious personnel shortage due to injuries, many in key positions.

Greenfield, now 3-4 overall, broke a three-game losing streak with the win over Central.

After the clock was downgraded from 12 to eight minutes per quarter in the second half, the Jackets added their final seven points in the third, and the fourth quarter went scoreless for both teams.

The first quarter featured a 26-yard TD carry by Blake Rodehaver, a 30-yard scoring pass from Craig Ross to Will Harris, a 16-yard TD by Hayden Smith, and a two-yard TD by Chandler Finch.

The Jackets scored on a pass from Ross to Harris 10 seconds into the second quarter, but Central’s Gavin Johnson broke through and knocked down the extra point kick. Half a quarter later, Ross connected with a medium range pass to Rodehaver, who legged it the rest of the way in a 50-yard scoring play.

At around the 7:00 mark of the third quarter, Greenfield’s O’marion Miles intercepted a Central pass and ran most of the field for a touchdown, which turned out to be the last TD of the evening.

The Tigers are hosting Perry County (1-6, 0-3) in a regional contest Friday night, and the Jackets are traveling to West Carroll (5-2, 2-1) in another region battle. Both games start at 7 p.m.