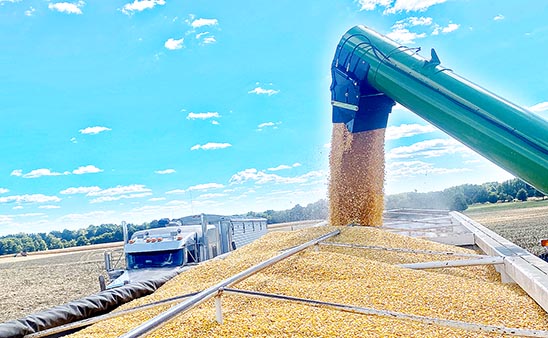 HARVEST TIME IN TENNESSEE – Weakley County Extension Director and Agriculture Agent Jeff Lannom reports 2021 has been a good year for farmers, with increased yields of corn, wheat and other grain crops. Davis Brothers Farms have been busy harvesting their corn planted in rural parts of Weakley County. Photo by Chris Keylon

WEAKLEY COUNTY (October 5) — Local farmers are busy harvesting abundant crops this year, as the end of an excellent growing season draws near.

“Corn yields have been average to above average in different parts of the county, due to differing rainfall amounts,” said Lannom. “I have heard several really good yield reports and I have measured several different corn yields.”

A couple of the fields Lannom tested were over 200 bushels per acre, as were acreage he measured in National Corn Grower yield contests.

Lannom reported the first opportunity for corn planting in 2021 was around April 6, which was followed by plantings in mid and late April, late May and early June. “The first two plantings yielded exceptionally well, and all-in-all, we’ve had a very good corn production year.”

Farmers across Tennessee and Weakley County produced a bumper crop of winter wheat in 2021, compared to last year’s totals, thanks in large part to good weather conditions during the fall of 2020. This allowed producers to begin planting early and to plant more acreage.

He noted in 2021, Weakley County farmers planted 24,552 acres of winter wheat, which is 6,952 more acreage than the previous year.

“We had a really good wheat harvest this year,” Lannom said. “I don’t have a county average yield yet. It may be early December before I have those numbers.” However, he stated wheat production in Weakley County during 2021 is significantly higher than it was last year.

According to Lannom, farmers typically plant their wheat crops during the months of October and November and begin harvesting them in June. Once the wheat crops are harvested, farmers begin planting soybeans on the same acreage.

“If we have good weather this fall, I project farmers will plant even more acreage,” Lannom said.

When asked how inflation is impacting the farming industry, Lannom stated that it’s costing farmers more to produce agricultural products this year. “Input prices are already up,” he said. “This year’s wheat crop will cost more to put in than last year’s crop.” He remarked the cost of seed, fertilizer, chemical treatments, diesel fuel and other products necessary to plant and harvest crops, continues to increase.

Lannom said, unlike manufacturing businesses, which can pass the cost of their products onto their customers, “farmers don’t set prices; they accept prices.” He added, these inflation-driven price increases “eat into their profits. Although wheat prices are currently up, who knows what the prices will be when they harvest their crops.”

According to statistics released by the Tennessee Field Office of USDA’S National Agricultural Statistics Service, Tennessee winter wheat production is up markedly from 2020.

Tennessee farmers harvested 23.4 million bushels of winter wheat during the summer of 2021, which is up 73 percent from the previous year.

However, the price of a loaf of bread locally is somewhat lower, at approximately $1.19 for white bread and $2.19 for wheat.

In West Tennessee, corn, wheat, cotton, and soybean harvests were active, with scattered showers slowing harvest in some areas. Cotton defoliation was active, with some producers making the decision to wait until drier weather prevailed.

Double cropped soybeans were beginning to yellow. In Middle Tennessee, harvest was active for most of the week.

Acres planted to corn, at 93.3 million, are up 3 percent from 2020. Area to be harvested for grain is forecast at 85.1 million acres, up 1 percent from last month and 3 percent more than was harvested last year. Approximately 60 percent of this year’s corn crop was reported in good or excellent condition, 2 percentage points below the same time last year.

Corn production is up 6 percent from last year, forecast at 15.0 billion bushels.

The Weakley County Extension Office is a unique partnership between Weakley County Government, the University of Tennessee and the United States Department of Agriculture. Visit the Tennessee State 4-H Website to learn more at: http://www.utextension.utk.edu/4H/