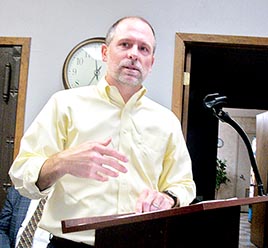 Michael Shelton, of Kimley Horn & Associates, Inc., addressed the Dresden Board of Mayor and Aldermen Monday night to explain the results of a study involving plans for upgrading city streets. The plan outlines improvements to make streets safer for traffic and pedestrians, particularly at dangerous intersections.

DRESDEN (October 4) — One of the main topics for discussion during Monday night’s Dresden City Board meeting involved the results of a study outlining a Complete Streets Plan, which lists the proposed improvements of city streets to address traffic and pedestrian safety concerns – particularly at dangerous intersections.

Dresden’s Complete Streets Plan study, which was funded by a Tennessee Department of Transportation Rural Community Transportation Planning Grant, indicates those streets that need to be upgraded the most, and provides guidance regarding which grants are available to bring about these improvements. It will be up to the City of Dresden to apply for those grants as they become available. This study was paid for with State funding, at no cost to the citizens of Dresden.

As a part of the agreement to receive funding through the grant, the City of Dresden will need to formally adopt a resolution allowing the implementation of recommendations from this plan. A resolution to that effect will be presented at the November Board meeting.

Shelton stated Dresden could prioritize the various projects outlined in the Complete Streets Plan and compete them, as grant funding becomes available.

Scope of Work and Costs

The City of Dresden Complete Streets Plan provides recommendations that were developed through input and feedback from the local community.

After reviewing the deficiencies found along city streets and at intersections, the study recommends the following improvements and provides cost estimates for each project:

The project also calls for updating pavement markings to improve intersection functionality, and the installation of additional landscaping, such as trees, where there is no conflict with overhead or underground utilities.

The goal of these recommendations is to improve safety at the intersection and create an aesthetic gateway into the City of Dresden.

The plan also calls for installing ADA compliant sidewalks and suggests planting trees where there is no conflict with overhead or underground utilities.

In addition, a TDOT Road Safety Audit project along TN-22 at Linden Street has been ongoing during the development of this plan. Concepts identified in this CTPG report have been shared with the Road Safety Audit team for consideration.

Regarding the school crossing at Linden Street and Highway 22, Dresden City Recorder Jennifer Branscum explained, “The Safety Audit is something TDOT did on their own, based on the number of accidents at that intersection. It just so happened, it took place at the same time we were doing our complete street study. They did their own audit and made their own recommendations.”

Branscum stated Dresden shared the results of its study and its thoughts concerning the intersection with TDOT.

“They looked at it and incorporated the crosswalks we thought were needed at that intersection, due to the amount of student traffic, and they did similar studies on their own,” Branscum said. “That had nothing to do with the grant we received.”

Major improvements at the Poplar and Morrow Street intersection would include the re-alignment of Poplar Street at the intersection to improve vehicular and pedestrian safety, and the addition of sidewalks along Morrow Street.

It also recommends adding of trees in areas where there is no overhead or underground utility conflicts.

These improvements will add needed pedestrian facilities and improve safety conditions for both pedestrians and vehicular movements.

The key improvements for this study area would include installing raised, ADA-compliant sidewalks leading to and from the intersection of Evergreen Street and Highway 22 and neighborhoods to the north.

Guardrails should be installed along the northern edge of Evergreen Street to improve vehicular safety.

Additionally, trees planted along the street in areas where there is no overhead or underground utility conflicts, would improve the aesthetic experience.

The key improvements for Evergreen Street at the Highway 22 intersection would include installing raised, ADA-compliant sidewalks leading to and from the intersection with ADA curb ramps.

Adding a Rectangular Rapid Flashing Beacon (RRFB) system for the pedestrian highway crossing, painting crosswalks to define crossing areas, and installing new curb ramps in raised channelized islands to create a pedestrian path of travel across the intersection – would all contribute toward improving pedestrian traffic safety.

Landscaping to improve the appearance of the intersection includes planting trees along the street in areas where there is no overhead or underground utility conflicts.

The study lists several grant sources and the percentages provided by federal, state and local entities, as follows:

Multimodal Access Grant: provides 95 percent in State funding and requires a local match of 5 percent. The maximum amount provided by the grant is $1 million.

TDOT’s Multimodal Access Grant is a state-funded program created to support the transportation needs of transit users, pedestrians, and bicyclists through infrastructure projects that address existing gaps along state routes.

Transportation Alternatives Grant: paid for by 80 percent in Federal funding and, 20 percent in local revenues.

More than $317 million in grants has gone to 267 communities across the Volunteer State to build sidewalks, bike and pedestrian trails and to renovate historic train depots and other transportation related structures. These projects serve to improve access and provide a better quality of life for people in the state of Tennessee.

Local Parks and Recreation Fund: is a grant paid for by 50 percent from State sources and 50 percent in local funding. The maximum amount of the grant is $1 million.

The LPRF program provides state funding for the purchase of land for parks, natural areas, greenways and the purchase of land for recreational facilities. Funds also may be used for trail development and capital projects in parks, natural areas and greenways. Typical projects include: land acquisition, indoor and outdoor recreation facilities, and trail development.

Recreational Trails Program: provides up to $250,000 in grant money, with the State paying 80 percent of the costs and the remaining 20 percent coming from local sources.

The Highway Safety Improvement Program (HSIP) is a core Federal-aid program with the purpose to achieve a significant reduction in traffic fatalities and serious injuries on all public roads, including non-State-owned roads and roads on tribal land.

Typical Projects covered by the grant include: safety improvements, such as guardrail, turn lanes, signage, and signals.