A large number of people attended the funeral of Sgt. Danny Browning of the Weakley County Sheriff’s Department on Friday. The longtime officer and recently-elected Gleason alderman succumbed to COVID-19, after a lengthy hospital stay. 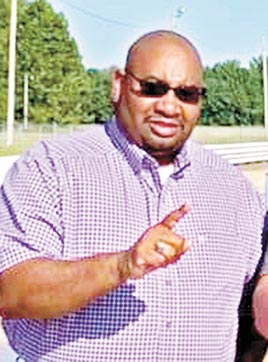 WEAKLEY COUNTY (October 6) — Family members, friends, and the Weakley County law enforcement community, are mourning the death of 53-year-old Weakley County Sheriff’s Sergeant Danny Nelson Browning of Gleason, who passed away on Tuesday, October 5, following a lengthy battle with COVID-19. Besides serving as a peace officer for the county, Sgt. Browning also served the City of Gleason as Vice Mayor and Alderman.

Browning was diagnosed with COVID on September 2, 2021, and was admitted to the West Tennessee Healthcare Volunteer Hospital in Martin; but after a couple of weeks, he was transported to Jackson-Madison County General Hospital, where he continued to receive treatment. After fighting COVID for almost a month, he succumbed to the virus last week.

According to Chief Deputy Mark Black, Browning worked for the Weakley County Sheriff’s Department for 22 years.

“Danny started with us in 1999 as a deputy road officer, and since then, he has moved up to the rank of Sergeant,” Black said.

“He’s trained several new officers. He took them under his wing and taught them how we operate.

“Danny’s done a little bit of everything including: patrolling, working in court, serving papers and working accidents. He supervised his shift and delegated the calls. He sent the officer closest to the call to the scene, and most of the time, he’d go too and oversee the call.

“We’re usually short on troopers, so the Sheriff’s Department responds to most minor wrecks, but the THP handles accidents when there are major injuries involved.

“A lot of people loved Danny,” Black said. “He was just a good guy. I can’t say enough about Danny. He was a good officer.”

“Sgt. Browning was a community type person,” Black said. “He enjoyed participating in community events, such as the Tater Town Special in Gleason and the Greenfield Fire Prevention Festival.”

Gleason Mayor Charles Anderson said, “Danny was elected as a Gleason alderman in the 2020 November General Election, and because he received the most votes of any alderman, this put him in the position of vice mayor.

“He has done a great job for the city during the past 10 months. Unfortunately, his service was cut short. It’s going to be hard to replace him.

“Danny was a very jovial man. He met everybody with a smile and kind words. He was kind to everybody, even when he had to be the toughest in his role of law enforcement. He got the job done without having to be an overly forceful iron-hand officer.

“Everybody in the city loved Danny and he loved everybody. He was a kind-hearted man. I really miss him.

“Although Danny is from Greenfield, he has lived in Gleason for the past several years. And he’s loved just as much in Greenfield as he is in Gleason.

“A lot of people are struggling with COVID,” Mayor Anderson said. “Danny was a big, strong man, but he couldn’t overcome it.”

Mayor Anderson stated Alderman Browning will be honored during the next Gleason City Board meeting on Monday, October 18.

As for his civic affiliations, Browning was appointed Deputy Director of the Weakley County Civil Rights Board, and was a member of the Gleason Masonic Lodge #330 F&AM.

The Tennessee Highway Patrol and Martin Police Department served as casket guards during visitation prior to the funeral.

A procession of vehicles from the Weakley County Sheriff’s Department; Tennessee Highway Patrol; police departments from Gleason, Dresden, Martin, Sharon, Greenfield, McKenzie, and Bradford; and sheriff’s departments from Gibson County and Humphreys County, escorted Sgt. Browning’s body to the church. After leaving the church, the funeral procession went past Gleason City Hall, traveling along Highway 190 to Pillowville, then continued to Greenfield along Highway 124 to the cemetery.

Graveside services, which were reserved for immediate family and officers only, were held at Rose Hill Cemetery in Greenfield. As the services drew to a close, Retired Marine Corporal James Washburn of Dresden played “TAPS” in Browning’s honor. In keeping with a long-standing tradition, Weakley County 911 Director Christy Fulcher broadcast a “10-7” (last radio call). A “10-7” is the same call designation issued at the end of an officer’s shift every day.

Sgt. Browning was preceded in death by his father, Robert Jeter; parents, Bill and Nell Willoughby; and cousin, Dean Browning.