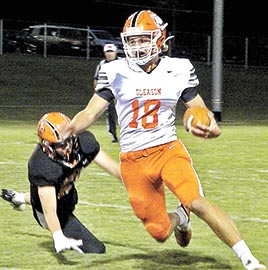 GREENFIELD (September 24) – Friday night offered a matchup of two Weakley County high schools vying for the win. The Greenfield High Yellowjackets hosted the Gleason High Bulldogs to see who would come back from the previous week’s losses. Both Greenfield and Gleason lost in week five of the season with the Jackets losing to Peabody 42-12 and Gleason falling to Dresden 41-0.

The Jackets received the ball first with Gleason deferring for the second half of the game. Greenfield made slow progress down the field but began the trend for the Jackets, not having the yardage to have a first down. The Bulldogs received the punt early in the quarter and the bulldogs made their way down the field with quarterback Kolton Crochet running the ball for several yards. The Bulldogs made it within five yards of the end zone with Crochet running for a touchdown, which was flagged off with a penalty on the bulldogs. That did not stop Drake Lovell from bringing the Bulldogs back to the four-yard line, which Crocket ran, for the first touchdown of the night. Gleason failed to secure the two-point conversion, which had the score at 6-0.

The Jackets received the ball but with two incomplete passes in a row, it resulted in Greenfield not having enough time to make any large play before Gleason received the ball again. While the Bulldogs had hoped for another touchdown in the first quarter, a pass from Kolton Crochet was intercepted by Hayden Smith on Gleason’s 39. The quarter would end with Greenfield in possession of the ball and the score with Gleason leading 6-0.

The second quarter began with only small gains for the Jackets and a turnover on downs to Gleason. Bulldogs Isaac Denton, Drake Lovell, and Kolton Crocket worked to bring the ball down the field. But it was Denton who brought the ball from the 33-yard line to the end zone and brought the score to 12-0. The Bulldogs were successful this time in the two-point conversion and led 14-0.

The Jackets were led by Hayden Smith making some short gains but, as the trend for this game, Greenfield punted the ball back to Gleason towards the end of the second quarter. Gleason made a hard push as they were on the 50-yard line and quarterback Crochet passed to Austin Clark who took the team 18 yards down the field. The Bulldogs received two false start flags before the end of the first half, unable to make another touchdown.

This brought the halftime score with Greenfield yet to get on the board as Gleason led 14-0.

The second half began with Gleason receiving the ball as per their deferment at the beginning of the game. The Bulldogs, despite a penalty, were gaining the yards needed for the first down. Gleason had yet to cross the 50-yard line when Kolton Crochet ran for more than 30 yards. Crochet ran for several yards, and with teammates Isaac Denton and Brady Witherspoon, brought the ball to the six-yard line. Crochet secured the touchdown for running those six yards and took Gleason to 20-0 with a failed two-point conversion.

Greenfield’s quarterback Craig Ross threw to Matt Scates for 19 yards giving the Jackets a much-needed gain in the game. But the Jackets’ offense started to falter as Ross was sacked two times in a row. Gleason received the ball and made slow progress down the field before they landed on the 43-yard line and Kolton Crochet ran for almost 50 yards to the end zone and after the extra two points took the team to 28-0.

The third quarter ended with Greenfield working to move the ball. The start of the fourth quarter began with Craig Ross missing the hike, which put the Jackets far behind the line. The Jackets struggled with passing the ball as one incomplete pass would have given the Jackets the first touchdown if caught. Gleason would receive the ball due to a turnover, but they would give it back to the Jackets, which were not able to have the communication needed to make any major plays and get on the board.

The final score of the game was Gleason shutting out the Greenfield Jackets 28-0.

After this game, this brings Gleason to 4-2 and Greenfield 2-3 for the season.

Both coaches had some comments to make after the game with Head Coach for Gleason, Noah Lampkins commenting that the team had some mistakes in the game with not getting all of their two-point conversions, but said the team was able to control the line of scrimmage very well and that was something he was very proud of. Lampkins also stated that Kolton Crochet gave an excellent effort with the runs and touchdowns that he was able to make and that the whole team gave a great effort.

Greenfield’s Head Coach Don Pitt said this after, “In our football circle right now there is a lot of disappointment and issues with some attitudes and effort and that is something we have got to correct.”

He went on to say that the team was down due to the score of the game and that affected the players. He also noted Merric Anderson, who is currently out due to an injury, will hopefully be back on the field this Friday night and that, along with refocusing during practices, will help to turn the team’s attitude on the field around. 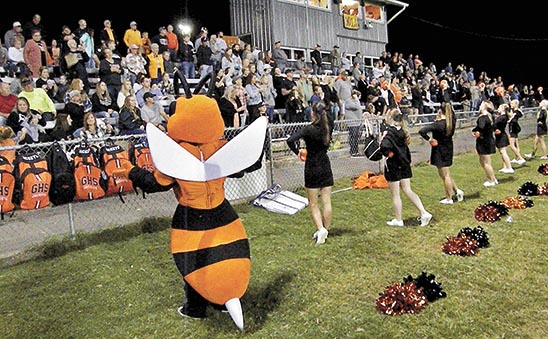