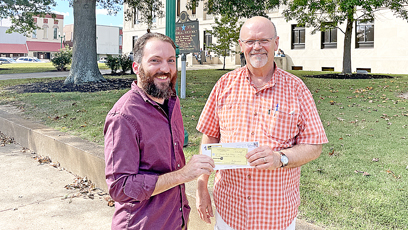 Tom Reavis (Right) served as the president of the David Johnson Chorus when members determined it was time to dissolve the group, initially formed by Dresden High School alumni and that grew to more than 30 members from northwest Tennessee and Kentucky. After spending more than two decades performing together, the Chorus had nearly $12,000 in cash on hand and from sales of equipment, etc. Officers have been giving away the funds to schools and nonprofits. He is seen here presenting a check to Jacob Abbott of Dresden High School for use with the school’s music program.

DRESDEN (September 16) – “When you are singing in a chorale group, at some point, your hearts end up beating exactly the same,” said Tom Reavis of the phenomena that occurs when a group of people are coordinating their breath for a performance. The description is also true when the love of music makes you want to add to a legacy with an investment in the future.

On May 31 when the David Johnson Chorus sang their final notes in a farewell concert at Dresden First Baptist, the 250-plus member audience of family and friends could have easily assumed that would be the last they would hear from the group that had spent 23 years entertaining audiences across the south and beyond. But leadership had one more crowd-pleasing concerted effort in mind.

Last week, Reavis, the group’s president, made good on a commitment he and Johnson, the Chorus’ namesake and director; Gail Dyer Jercinovich, the general manager and secretary/treasurer; and Keith Kemp, vice president, had determined was the perfect outro for more than two decades of musical camaraderie. He handed over a $1,000 check to Jacob Abbott, the current music teacher, choir director, band leader, and theater director at Dresden High School, the place where the Chorus was launched.  Reavis estimates that close to $12,000 was the group’s to give away once it was determined that the DJC would disband.

“There comes a time when it’s time to stop,” Reavis explained of the difficult decision to discontinue performances and liquidate the chorus’ assets. He then laughed as he added, “David didn’t want it to come to folks saying, ‘I remember when they were pretty good.’”

“Pretty good” may easily be deemed an understatement. Since 1998, when alumni who once sang in Johnson’s DHS chorus decided to perform to raise money for the school’s Project Graduation fundraising, the group has become known from Mississippi to D.C. Numbering around 30, the group included “doctors, lawyers, judges, and coaches,” Reavis said, and sang to children, wounded soldiers, and veterans in hospitals, and before audiences of special needs adults as well as fans, friends, and family from across northwest Tennessee and southwest Kentucky.

Now they’ll be sharing financial gifts with some of the same nonprofits that enjoyed their music.

But Reavis wanted to make sure the group’s roots benefited from their philanthropy as well.

“I wanted to give something to our local high school; that’s where we all started,” he explained of his contact and subsequent check delivery to Abbott.

The financial gain wasn’t the first donation, however. When the May concert concluded, chorus members who usually broke down the staging for storage, instead drove directly from the First Baptist Church to the high school for a special delivery. All the risers – a gift estimated at more than $3,000 – found a new home on the DHS theater stage.

Reavis confesses the dissolution of the chorus has been emotionally trying, but the joy of giving the funds to groups like DHS and some of the nonprofits to whom they once sang is evident as the Dresden business owner shared stories from behind the counter at ET Reavis & Son. He enthusiastically talks about the work of a homeless ministry in Memphis that “gives him goosebumps” and laments that he and one of his many guitars, displayed in the store, can’t join Abbott and the pop band in the stands for games.

“Everybody had to grieve and get over it. You were obsessed about it. It was such a part of my life. For instance, right now, I would be singing Christmas music in the mornings, trying to get it learned by concert time,” he noted, nodding toward his bag of music which he says remains untouched, exactly where he dropped it four months ago.

The dedication and discipline that saw chorus members faithfully rehearsing two hours each Sunday night, ten months out of the year, is among the benefits both men hope to see transferred to the current students.

“If Jacob can instill in them that musical itch, then they will have it the rest of their lives. It will be a way that they can have pleasure and maybe share something with other people,” Reavis said. “It’s just something that connects everybody. It nourishes your soul.”

Abbott added, “If you are in music to learn and because you enjoy it, then it’s the gift that keeps giving. All the discipline it takes to learn music, to do your part, and be a member of the group, trickles into every other aspect of your life.”

A grateful Abbott plans to spend the money on a generator to take on the road so that the newly formed pop band can play for away games but also for use at the DHS stadium as they currently must plug in amps, microphones, keyboards, and speakers with cords running from the weight room. New sheet music and instruments are also on the wish list.

Along with the check to DHS, the Chorus, through board member Jeff Higgs, also shared separate checks of $250 each for Pam Sliger to use as she teaches music at Martin Primary, Gleason and Sharon. Those monies will be used for classroom resources and instruments, she said.