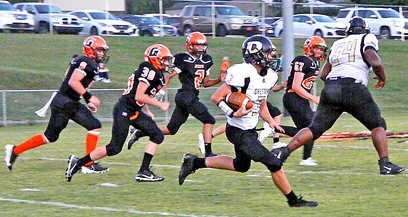 Greenfield started the game receiving the ball and making slow progress before having to hand the ball to Dresden. Dresden did not go far either with the Lions fumbling and the Jackets picking up the ball. The first quarter included both teams working to find a harmony and make the downs they needed to get the ball down the field.

The second quarter had some early excitement as Greenfield’s Brice Totty ran for a touchdown for the Jackets. The team scored the extra two points, which brought Greenfield to lead 8-0.

The Lions faced some weaknesses in their offense with not being able to complete throws. Greenfield was not immune to incomplete passes, making some in the second quarter. Greenfield had a misthrow in the end of the second quarter, which Dresden’s Cooper Allman intercepted. Dresden made a good push at the end of the first half, but was not able to get a touchdown before halftime.

Dresden received in the beginning of the third quarter and turned over the ball to Greenfield due to a loss on downs. The Jackets had to turn around and punt back to Dresden. Due to a flag, there was a repunt of the ball, which Cooper Allman of Dresden caught, missing every player and gave Dresden its first touchdown of the game. Those brought the score to 8-6 with the Lions missing the extra points.

Dresden finished the third intercepting the ball at the end of the third quarter. The Lions were able to bring the ball to the endzone with another touchdown and the extra two points, which took the Lions to the lead at 14-8.

Dresden is hosting Gleason this Thursday night and Greenfield is traveling to Stewart County.