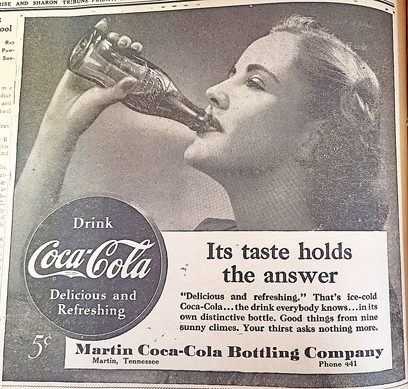 The end of 1938 was quiet other than talks of elections and board meetings with the occasional passing of a prominent member of the Weakley County community.  But, there are news stories that should be of interest to readers in todays ‘time.

Jolley Springs Baptist Church has always been a well-known part of the community for many years and was when the article, “Jolley Springs 50th Anniversary,” was featured on the front page of The Enterprise. The article read as follows, “Sunday was a red-letter day in the history of Jolley Springs Missionary Baptist church, six miles east of Dresden, the occasion being the 50th anniversary of the organization of the church. The Rev. J. A. Wilkerson, pastor, was master of ceremonies. He called attention to the fact that in all these 50 years, Jolley Springs had but 17 pastors, among them the late Elder C. C. McDearmon, whose widow was one of the remaining two charter members present, the other being Aunt Et Summers. In the afternoon, the Rev. Dan Brinkley from Oklahoma City, Okla., brought a wonderfully inspiring message. Rev. J. F. Powers read the church history.”

The papers, “It Happened 25 Years Ago,” featured many tidbits about life and news happening in the year of 1913. Noting that F. M. Holbrook, the father of the editor J. L. Holbrook, had died at his home. An advertisement was also featured in the 1913 edition that reads, “R.R. Scott, Greenfield, denied that it was his car that caused a horse to run away and get killed during the county fair.”

The 1913 edition also had a look back at the years with, “The Following Events Transpired From 1855 to 1888 as recorded in the diary of I. F. Smith, formerly of Sharon and who died in 1888.” In it, it told of elections in the state of Tennessee, including the election of governor, Isham G. Harris in 1857. In 1861, “war between the states began and snow fell to a depth of two inches on October 25, 1861, but vegetation not filled.” Also going on to say, “Sharon station established on Mississippi Central R. R. (now the I. C. in 1873)… The first passenger train passed south through Sharon Dec. 23, 1872.”

Picking back up on the events of 1913, it was reported Senator Elkins visited Greenfield and planned to talk about having gravel roads and streets and the importance of that issue in the state.

Martin hosted an agricultural show that week and featured 75 poultry pens for a show. The local 4-H brought home prizes from their corn, cotton, sweet potatoes, tobacco, and peanuts. Mrs. Lizzia Sanders won for her garden, which had nine different fall vegetables being grown. The fair also showcased different booths from organizations and clubs from all over Weakley County. The ag show ended with, “ … one of the longest boys and girls’ parades ever seen in the county, with a horse and mule show after which many children were very excited for.”

The local 4-H was mentioned on the front page again, this time for winning at a national 4-H conference titled, “Weakley County 4-H Boys Cop Blue Ribbon at Chicago Congress.”

The article read in part, “Four bright, energetic Weakley county young farmers, all 4-H Club members, are wearing broad smiles – they captured the blue ribbon on their sweet potato exhibit at the National 4-H Club Congress in Chicago on Monday. These lads made up their own exhibit from potatoes they themselves produced, and, under the supervision of their leader, Agent R. E. Elllis, the display was entered at Chicago, with the result that their Nancy Hills captured the award of blue ribbon.”

In other local news, the Dresden High School and Gleason High School football teams faced off during a, “Turkey Game,” which ended in a tie of 6-6. The game was played during a particularly cold night, but many still came out on Thanksgiving Day to watch their local high school teams face off. Not much more of the game was told but that Dresden blocked Gleason very well and the Lions had an injury late in the game, which took player David Brooks out for the remainder of the game.

A shocking story was on the front page of that week’s issue with the article titled, “Chose Office of Sheriff To Attempt Death.”

It was reported Thos. Moore, a well known member of the 16th district was in the office of Sheriff Ret Harris, being seen for a bad check of $22. Moore attempted to die by suicide by taking, “two seven and one-half grain bycholoride of mercury tablets,” from a bottle which was labeled, “poison,” but Sheriff Harris acted quickly in calling a doctor. Dr. Fields came to the office and brought a stomach pump, gave Moore medicine and he was carried away on a stretcher. Dr. Fields said that amount of mercury was enough to kill many people. Moore said before being carried away that he wanted to end it all. He was a father to six children and married to the daughter of another prominent member of the community, Ed Stout, who was known, “ … in the political circles and a well known farmer.”

Not much was known as to why Moore’s check was bad.

In the Christmas edition of the Dresden Enterprise, it told of good deeds being done all around the county. Santa had made a point that year to visit all of the many Sunday Schools in Dresden, bringing Christmas trees and good cheer to the children and adults in attendance. Santa heard the many wishes of the children at the different churches and celebrated in the beautiful decorations.

This issue also reported on the fire at Hyndsver School. “The school house at Hyndsver, a large, two-story structure, with auditorium and rooms on the second floor, and three class rooms below, was burned to the ground Monday. Ehen discovered the fire was burning near the flue. Books, desks and lights were saved. Loss estimated at around $4,000, with $2,000 insurance. School is being continued in the business house of Edq. Jack Davis, who very graciously tendered the use of the vacant building. Mrs. Ford states that plans are already in the making for rebuilding, the new structure to be one-story and along modern lines.”

In lighter news, “Stockings for 100 Children” read the following news of goodwill, “The Christmas committee, representing the civic clubs, churches and business and professional interest of the city reports that a grand total of 100 filled stockings for underprivileged children will be distributed Christmas even in this immediate community. In addition, there will be 20 large baskets sent out to the needy. Each basket will contain a sack of flour, coffee, sugar, meat, lard, so on.”

Along with the stories of stockings being handed to children from lower income homes and Santa coming to bring meat and fruits to families in need, one story featured men who were a bit too jolly for the holiday season.

“Christmas Drunks Galore Locked Up,” read as follows, “Yep! Repeal makes for soberness! An all-time record was established here during the Christmas holidays, when Chief Freeman, Sheriff Harris and deputies arrested in Dresden 25 men, more of them on drunk charges. Many of them were locked up until Monday, when the long line was marched to police court for the finishing touches of Christmas, generously administered by Recorder Ben Rawls.”

The beginning of the new year, 1939, brought a near-death experience and mystery for law enforcement, which was so compelling that it needed to be quoted in full.

“Attempted Act of Strangers is Mysterious”

“Much excitement was created near Palmersville Saturday night, when Bewing Austin, of the First district, and son of Bob Austin, was driving along the highway in the bottom beyond Palmersville, and another car forced him to the side of the road, although he didn’t completely stop, and one of the two occupants of the other car remarked: “That’s the man we want,” and, with a flashlight and a pistol lying across the crook of his arm, started shooting at Austin who accelerated his machine and outran the would-be robbers, or murderers.

Austin stated to Sheriff Harris that he couldn’t identify the driver or the other occupant, by they were driving either a 35 or 36 Ford car. Austin was alone, and made his escape by literally out-running the other car. Four shots were fired at Austin seated in his car, two passing completely through the car, and two more glancing off. Austin was driving a brand new Ford that he had purchased that afternoon in Fulton. Highway Patrolman Shobe Smith and Deputy Carl Wadtkins went to the scene, but no trace of the elusive car could be found. Sheriff Harris was also called to Palmersville later in the night, but no clues could be found.

Sheriff Harris was called back to the river bottom beyond Palmersville Sunday, where a passerby had noticed a slot machine abandoned in the river. The machine was partly submerged and the contents had been rifled. Sheriff Harris believes the machine must have come from Kentucky some place, and abandoned by robbers near Palmersville.

The slot machine may, or may not, have any bearing on the attempted shooting or robbery Saturday night. Officers advance the theory that, whoever abandoned the slot machine in the river, were alone and thought he might know the robbers and they attempted to get him out of the way.

Austin stated that he had only about $26 in his pocket, and that no one knew it, therefore he doesn’t believe they were trying to rob him. He is in a daze as to just what was about to transpire, a close call with the pistol in the hands of his attempted slayer.”