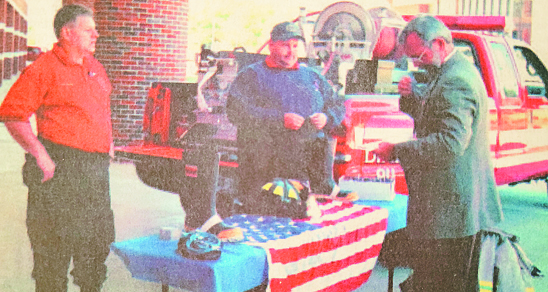 WE REMEMBER – A photo, which was featured above in the September 26, 2001, edition of the Dresden Enterprise following the terrorist attacks on the United States, highlighted a donation drive for families of New York firefighters. The cutline reads as follows: “Martin fire fighters had a ‘boot’ drive Tuesday to raise money for the families of the more than 300 New York fire fighters missing since the Sept. 11 terrorist attack on the World Trade Center. Those collecting money at UT Martin, one of three donation sites, said they collected about $600 in the first two hours. John Ayers, left, and Joey Peirce accept a generous donation from a UTM faculty member.” Saturday, September 11, will mark the 20th anniversary since the terrorist attacks on the World Trade Center and Pentagon.