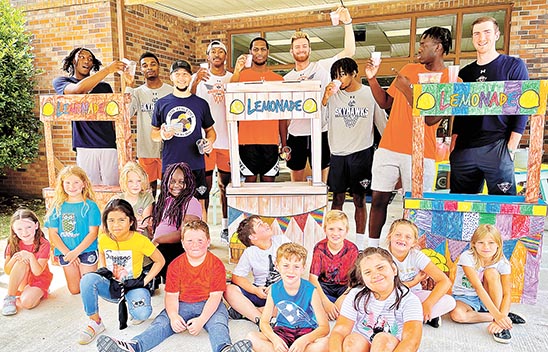 Second-grade teacher Angela Sams knew who to turn to when Martin Primary Summer Scholars wanted to call attention to their community service project of a lemonade stand raising money for St. Jude’s Children’s Hospital. The project was in honor of former student, Eleanor LaFleur-Garlitz, who is a patient at the children’s hospital. Sams’ son, former Westview standout and now graduate assistant working with the men’s basketball team at UT Martin, Garrett Sams, came through, recruiting several new players to assist. Sams said it made for a good introduction to the community for the players hailing from Florida, Missouri and across Tennessee. MPS students surrounded by the team members (who asked not to be named in order for the spotlight to be on the children) are (Back, L to R): Kylee VanCleave, Lucy Dowden, Teagan Buck, Zaria Simpson, Karson Turpin, Cason Boyd, Abigail Monroe, and Anna Farrar and (Front, L to R): Rebeca Juarez, Jack Drewry, Braxton Fuller and Jaylah Mejia. For complete details, see Page 8 of today’s edition. 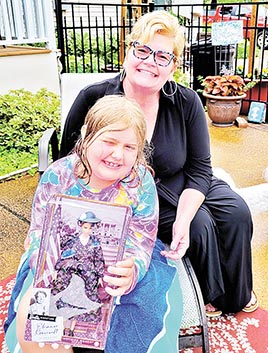 When Eleanor LaFleur-Garlitz recently turned nine years old, her former second-grade teacher Kim Castleman provided the backdrop for the celebration by offering the family her pool. Eleanor’s diagnosis of severe aplastic anemia earlier this year required her to attend Martin Elementary via homebound classes. She is currently a patient at St. Jude’s Children’s Hospital in Memphis, awaiting a bone marrow transplant. Students at Martin Primary School hosted a lemonade stand recently with proceeds going to St. Jude’s in Eleanor’s honor.

Martin Summer Scholars who are rising first-, second- and third-graders studied goods and services for the last four weeks. On the day before the program concluded, they learned that service can also be a way of doing good.

More than $1,200 was raised at a drive-through lemonade stand staffed by the primary students. The results of the hours-long investment will serve as a donation to St. Jude’s Children’s Hospital in honor of former student, Eleanor LaFleur-Garlitz, who is currently a patient there.

Martin Primary teachers, led by academic coach and Summer Scholars Director Emily Perry, chose to focus on community service after brainstorming the best way to bring the required reading and math lessons to an end. (Summer Scholars is the name Weakley County Schools designated for the state-mandated classes to address anticipated learning loss during the pandemic.)

The student-led enterprise included several mini-lemonade stands decorated by the children. Potential buyers were treated to entertainment as students chalked the sidewalks and hula hooped. And new University of Tennessee at Martin basketball players also dedicated time to keeping the students amused between customers.

After a morning of customer service, applying “soft skills” of greeting each driver and asking for orders, delivering the product, and remembering to say “thank you,” the students had a much better understanding of the stories they had read during their summer experience and how math skills apply to real life, said Perry.

“I think they all enjoyed it,” she observed after closing up shop for the day. “They realize it was work. They also learned life lessons in generosity as many of the stand’s supporters chose to make donations beyond the $1 for the glass of lemonade.”

Responding to questions of where the growing mound of money would be going also allowed for discussions about the children and families helped by St. Jude’s, Perry explained.

“We told them it helps the children who are sick like Eleanor, and it helps their families,” she recounted. “When they heard those children couldn’t be outside running a lemonade stand, it made them aware of their own health and the value of helping others.”

While many in this group of students were not yet in school when Eleanor attended – she is now 9 years old and a rising fourth-grader at Martin Elementary – her former teachers were excited about showing their love and support for her.

In homebound classes since receiving her diagnosis of severe aplastic anemia earlier this spring, Eleanor has been the focus of several efforts to ensure she knows she is not forgotten. Events like the recent one help the family remind her of the lasting impression she has already made and help to bring attention to a disease so rare St. Jude’s only sees four to five cases a year, wrote mother Renee LaFleur, as she settled her family into Target House for the next several months. Eleanor is currently undergoing tests and evaluations in preparation for a bone marrow transplant.

“Martin Primary was Eleanor’s home for three years. She had wonderful teachers and aids, two of whom we’ve stayed in contact with, and made terrific friends. They really are part of our family,” she explained. “It warmed our hearts when the kids wanted to donate the lemonade stand proceeds in her name. St. Jude’s is a blessing and so is Martin Primary.”