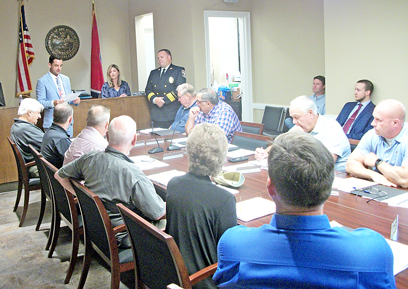 Weakley County Mayor Jake Bynum and members of the Weakley County Commission congratulated Dresden Deputy Fire Chief Kory Green, who was presented with the Weakley County Medal of Valor during Tuesday night’s commission meeting. The award notes Green, “earned the award for his tireless work, at great risk to himself, during the May 4th storm. His leadership and experience were indispensable in the County’s recovery effort, saving lives and property on that day.” 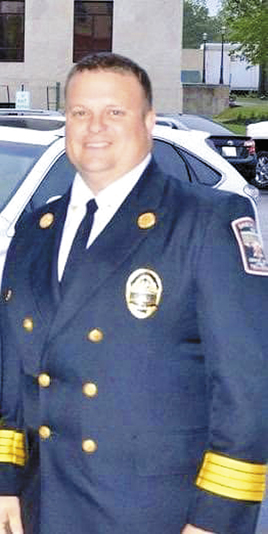 “In the early morning hours on May 4, 2021, tornado-force, straight-line winds tore through the center of Weakley County, damaging buildings and knocking down trees and utility lines in its path,” Mayor Bynum said. “Around 4 a.m., a 911 call was received from 5577 Greenfield Hwy. 54 in Dresden to report a tree had fallen on at least one home, and there were some residents unaccounted for. At that time, Deputy Fire Chief Kory Green of the Dresden Fire Department was among one of the first to arrive and assumed command of the scene.”

“With the storm still raging, an electrical pole snapped in half, causing live electrical lines to fall onto Deputy Green’s vehicle. It was only through experienced maneuvering that he was able to free his vehicle from the line and begin assessing the scene,” the mayor said.

“It soon became apparent that over half a dozen trees had damaged houses and blocked access to the neighborhood. Deputy Chief Green and his crew immediately began searching buildings for victims and clearing what brush they could to gain access to the remaining houses. He began calling in resources from around the county to aid in the recovery, and within hours, they were able to identify and extricate all victims of the storm.

“At great risk to himself, through timely and decisive action, Deputy Chief Green provided aid and recovery to the hardest hit area of the storm. It’s chiefly because of these actions that the danger to responders and residents was significantly mitigated. Ongoing recovery was made possible and lives and property were saved from further damage,” Bynum said.

As such, it is with great gratitude that we award Deputy Fire Chief Kory Green with the Weakley County Medal of Valor.”

Mayor Bynum’s comments were followed by a resounding applause from the commissioners and others in the audience.

Deputy Chief Green responded to the honor bestowed upon him by giving his crew the credit for their life-saving actions during the aftermath of the storm saying, “I didn’t do it myself. All I did was take command and direct people where I needed them. Our guys and the first responders actually got in there and pulled the people out. They did the hard work. They made our job look easy. So, all the credit goes to those who were with me that day. But, I surely appreciate it very much.”

The crowd gave Green another standing ovation, following his remarks.

The storm tackled by these brave emergency personnel was extremely dangerous, having claimed the life of a local resident when a tree fell on her mobile home on Greenfield Highway 54. Additionally, a neighbor’s kitchen was exposed when a tree collapsed on his mobile home, tearing open the roof.