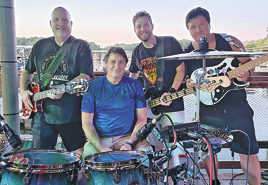 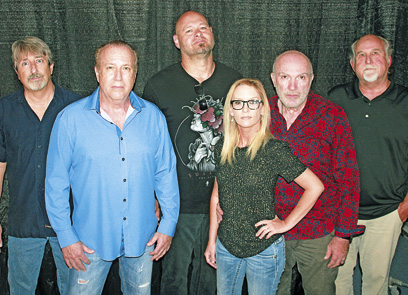 “The Side Effects” band will perform at Wilson Park in Dresden on July 3 during the city’s Fourth of July celebration, which will also feature food, games and a fireworks show. The band members are (L to R): Ken Robinson, Mike Peery, Rusty Jackson, Mandy Henley, Wes Henley and Larry Davis.

WEAKLEY COUNTY (June 23) — A variety of activities are planned to celebrate the nation’s independence during the Fourth of July weekend in Weakley County.

The City of Dresden is sponsoring its fourth annual Independence Day Celebration on Saturday, July 3, at Wilson Park, located on Evergreen Street. Events get under way at 6 p.m.

Live music will provided by “The Side Effects” band, which reportedly plays a lot of classic rock and roll, country, blue grass and other genres of music. The band members are: Kenny Robinson on keyboard, fiddle and guitar; Wes Henley, who was lead guitarist for the Carl Perkins band, and jammed with George Harrison of the Beatles; Mandy Henley, vocalist; Mike Peery, bass; Larry Davis, drummer; and Rusty Jackson, lead vocalist. According to Robinson, “The Side Effects” band has only been playing for a couple of years, but individual members of the group have been in the music business for the past 30-40 years.

“We’re also going to have a lot of games for the kids and adults alike, including: corn-hole, yard darts and other activities.”

The mayor stated youngsters would have the option of playing on a water slide on the hill, which will be set up and operated by the Dresden Fire Department.

The concession stand at the park will be open and food trucks will be available to provide assorted treats, such as barbecue, snow cones, soft drinks and other foods.

Fireworks will light up the night sky with colorful displays at dusk.

“Everyone is invited to bring their lawn chairs and enjoy the food, entertainment, and fireworks show,” Mayor Washburn said. “We would appreciate everyone coming out, socializing, and enjoying one another’s company. All events are free of charge.”

“It will be an open event and people can exercise whatever degree of COVID protection they feel is appropriate for them,” Mayor Washburn said.

Plenty of parking spaces will be available at the front and rear of the Dresden Civic Center, along Gaylord Street, behind the boy’s T-ball and girl’s softball field, and the area leading to the basketball court.

The City of Martin is hosting a Fourth of July celebration at the Martin Recreation Complex on Sunday, July 4. Food trucks will open at 7 p.m. and a live DJ will begin playing tunes at 7:30 p.m. Children will receive free gifts, including beach balls, balloons and other items. The highlight of the event is the fireworks show, which is scheduled to start at 9 p.m.

Gleason’s Downtown Revitalization Committee is hosting an Independence Day celebration in the downtown area on Saturday, July 3, from 6-9 p.m. Events include live music provided by the “Midlife Crisis” band, featuring Ricky Morgan of Gleason. Midlife Crisis is a professional classic rock cover band with some of the best players and vocalists in the area. The group will play popular songs tunes from the 70s, 80s, and 90s, as well as current top hits. The band is known for its incredible musicianship and three-part vocals, which have the reputation of blowing their audiences away.

According to Gleason Mayor Charles Anderson, who also serves as Gleason’s Downtown Revitalization Committee President, a Cruise-In featuring restored classic automobiles and custom cars will be held on the square in downtown Gleason. He notes food trucks will also be available. The Fireworks Show kicks off at 9 p.m. Mayor Anderson encourages everyone to bring their lawn chairs, sit back, and enjoy good food, entertaining music, and an explosive fireworks show. It will also be an opportunity for local citizens to socialize with other members of the community, renew old friendships, and make new ones. All activities are free of charge.

The City of Greenfield is not having Fourth of July celebration this year. However, a fireworks show will be featured during the city’s annual Fire Prevention Festival scheduled for Monday, October 4 through Saturday, October 9.

Sharon is also not hosting an Independence Day celebration this year.