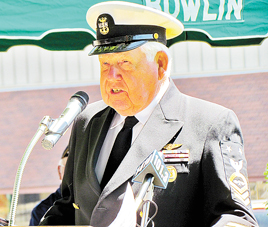 The guest speaker at this year’s Memorial Day remembrance ceremony was retired Command Master Chief of the Navy, Bob Spellings, who is a member of the War Memorial Committee, as well as Commander of American Legion Post #94 in Dresden.

DRESDEN (June 16) — The names engraved on the Weakley County War Memorial, located on the grounds of the Weakley County Courthouse in Dresden, reveals the rank and identity of military personnel who sacrificed their lives for their county, while serving in military conflicts around the world. Their names are listed according to the conflicts they were killed in including: WWI, WWII, Korean Warm, Vietnam War and Iraq War.

For reasons of confidentiality, the name of the soldier in this wartime story shall remain anonymous. However, it’s similar to many of the stories told by the friends and family members of other American military service members, who served in the Armed Forces of the United States.

An audience of approximately 150 people was in attendance at this year’s Weakley County Memorial Day ceremony, which pays homage to those from Weakley County who died in service to their country.

The event opened with a few words from Weakley County Veteran Service Officer Ricky Cobb, Ret. Sgt., who welcomed everyone to the ceremony and introduced those involved in the program.

As the program got under way, Rev. Tony Terrell, pastor of Beech Grove Baptist Church in Gleason, gave the invocation.

Next, current military personnel and veterans saluted and civilians held their hands over their hearts, as Terry Guthrie led the crowd in reciting the Pledge of Allegiance.

The guest speaker at this year’s Memorial Day remembrance ceremony was retired Command Master Chief of the Navy, Bob Spellings, who is a member of the War Memorial Committee. He is also the current Commander of American Legion Post #94 in Dresden. Additionally, Spellings previously served as Weakley County Veteran Service Officer and Emergency Management Director, as well as Executive Director of Tennessee Veterans Nursing Homes.

“There are 167 names on that wall,” Spellings said. “I think for a small county, like Weakley County, where the population has been around 30,000 for 50 or 60 years now, or maybe longer, that’s a significant sacrifice for a small county to make.

“Another thing we should never forget is that these young men left the factories and the farms. They put on their uniforms, and went to defend this country. A lot of them never came back. They weren’t old men like me,” Spellings said. “They were young, strong, good-looking, red-blooded Americans, who gave their lives for this country.”

The crowd listened intently as Spellings recounted a story that was told to him 30 years ago by a WWII veteran who lived in the McConnell Community in northwestern Weakley County. The man informed Spellings that he and a neighbor, who lived about a half mile down the road from one another, attended the same school and were good friends. One day, his friend had a serious falling out with his father, who angrily expressed his displeasure over the way the young man plowed the corn on a section of the family’s farm.

“The teen was frustrated and upset and probably didn’t have a good home life,” Spellings said. “So, he left the team of mules in the field and ran away from home without saying a word to his parents. His folks later received a letter from their son informing them that he stayed at his friend’s house for a few days after leaving home, and then joined the Army. He went to boot camp at Ft. Oglethorpe, Georgia, in the spring of 1942.”

The young man mailed his parents another letter in the fall of 1942 saying he was on a ship headed for an island in the South Pacific to fight the Japanese.

His parents didn’t hear anything else from their son until about a year later, when they received a telegram from the Army reporting he had been killed in action. Approximately six weeks later, the parents received another telegram informing them their son’s body would be arriving in South Fulton by train on a certain date in December of that year. The father arrived as scheduled, and with the help of a U.S. Army soldier, who escorted the body to its destination, loaded the young man’s flag-draped coffin onto the farmer’s wagon. Spellings stated, ironically, the man revealed that, “The same team of mules the teen left in the field several months earlier, pulled the wagon that carried his body home.”

The names of other Weakley Countians, who bravely answered the call to duty under a variety of different circumstances and were killed in action, are also engraved on the monument.

A popular saying recited by many American patriots on Memorial Day is as follows: “They gave up their today for our tomorrow.”

After Spellings concluded his remarks, Odie Leggins and Terry Casteel of American Legion Post #55 in Martin laid a wreath at the base of the Weakley County War Memorial.

Next, a roll call of Weakley Countians who sacrificed themselves in the name of freedom on foreign battlefields during World Wars I and II, the Korean War, Vietnam War, and Iraq War, were read and remembered. Those reciting the names of those killed in action were as follows: David Hawks – WWI; Kristen Childress and Marcus Hopper – WWII; James Washburn – Korean War, Vietnam War and Iraq War.

With the American flag at half-mast, retired Staff Sgt. Howard Spires played “Taps” as the program neared its conclusion.

The Weakley County War Memorial, which consists of a black granite center pillar with two outer marble pillars, was erected on May 30, 1993. It lists the county’s war dead from WWI, WWII, Korean War, Vietnam War and Iraq War.

Spellings, along with former Weakley County Commissioner John Salmon and retired Master Sgt. of the Air Force, William “Bill” McClain, spearheaded the effort to procure the Weakley County War Memorial and install it on the courthouse lawn on the town square in downtown Dresden.

Spellings said, “Prior to 1990, there was nothing in Weakley County to honor our war dead. At that time, I was the County Veterans Service Officer.

“John Salmon, who was a commissioner, talked to me about installing some kind of memorial to recognize the war dead. Of course, I agreed to it and thought it was a great idea. Commissioner Salmon brought it before the Weakley County Court (Commission), which approved it. County Mayor Kelly Killebrew also voiced support for the project. The Commission appointed a committee consisting of John Salmon (chairman); Bill McClain, who previously served as Weakley County Veteran Service Officer and Emergency Management Director; and myself,” Spellings said.

“John had a full-time job working at Goodyear, and Bill was retired, so I was responsible for making it happen, since I worked in the courthouse and was working with the veterans organization,” Spellings said.

He stated Bill McClain, who received a Purple Heart for being wounded in action during WWII, was a member of the DAV, VFW, and American Legion. Additionally, Bill and his wife were strong supporters of veteran organizations.

Spelling noted, after the committee got permission to place the monument on the courthouse lawn, he started looking at monuments in neighboring counties to determine what the monument should look like, and the committee settled on a design similar to the war memorial in Milan.

Spellings stated the committee had to determine what the qualifications were for names to be listed on the monument. They finally decided, in order for members of the U.S. military to have their names engraved on the Weakley County War Memorial, they must have died in a conflict defending our country. They must also meet three of the following qualifications:

With the assistance of the Department of War Records in Nashville, the committee then compiled a list of Weakley County’s servicemen who died as a result of injuries inflicted in past wars.

“They had a pretty complete list of the names we sought,” Spellings said. “However, we added a few names of those who were severely wounded, but made it back to the United States, and later died of their injuries.”

According to Spellings, in 1992, the committee began the process of seeking and obtaining funding for the project, which cost approximately $10,000. Everyone was very supportive. He noted private citizens and service clubs such as the VFW, American Legion, Rotary Club and Lions Club, donated the majority of the money. Weakley County Government, along with all of the cities in the county, also donated funds for the War Memorial.

“We collected the funds in a short period of time and had some money left over for upkeep of the monument,” Spellings said. “I think it should be the highlight of the county. It should be well maintained and kept in immaculate condition.

Gov. Ned Ray McWherter was the guest speaker at the dedication of the Weakley County War Memorial on Memorial Day 1994, which drew a large crowd of local citizens.