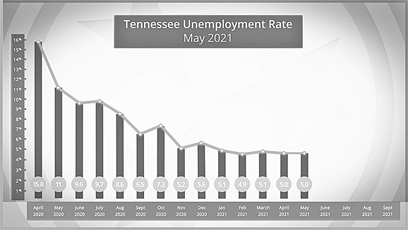 Tennessee’s statewide unemployment rate held steady at 5.0 percent between April and May 2021, according to newly-released data from the Department of Labor and Workforce Development (TDLWD). The chart above shows the steady decline in unemployment across the state over the past several months.

NASHVILLE (June 30) —According to the Tennessee Department of Labor and Workforce Development, unemployment dropped or held steady in much of the state. The majority of Tennessee counties recorded unemployment rates below 5.0 percent in May of 2021.

Tennessee’s jobless rate for May was unchanged from the previous month. However, it declined 4.6 percent from one year ago, when the state’s average unemployment rate was 9.6 percent. Unemployment, at that time, was severely impacted by business closures due to the pandemic. With a labor force of 3,334,094 a total of 3,167,930 were employed, and 166,164 were unemployed.

Weakley County’s unemployment rate of 4.0 percent for the month of May was up 0.2 percent from April’s rate of 3.8 percent, and 2.3 percent lower than last May’s rate of 6.3 percent. It was 1.8 percent lower than the national rate of 5.8 percent, and was 1.0 percent less than the state average of 5.0 percent. Out of a total countywide labor force of 15,649 workers, 15,023 Weakley Countians were employed and 626 were unemployed.

Carroll County’s jobless rate was 4.7 percent for May, which represents a decrease of 0.1 percent from the previous month’s rate of 4.8 percent, and 3.8 percent less than in May 2020. It was 1.1 percent below the national rate and 0.3 percent lower than the state average. Out of a total countywide labor force of 12,024 workers, 11,456 were employed and 568 were unemployed.

Gibson County registered 4.5 percent unemployment for the month of May, which is 0.1 percent less than the previous month, and 3.4 percent below one year ago. The jobless rate was 1.3 percent lower than the national rate, and 0.5 percent below the state average. Out of a total countywide labor force of 21,906 workers, 20,931 were employed and 975 were unemployed.

Henry County recorded a jobless rate of 4.5 percent for May 2021, which is 0.1 percent higher than April’s rate of 4.4 percent, and 4.3 less than it was at the same time last year. Unemployment was 1.3 percent less than the national rate, and 0.5 percent below than the state average. Out of a total countywide labor force of 13,583 workers, 12,976 were employed and 607 were unemployed.

At 5.2 percent, Obion County’s unemployment rate for May was unchanged from the previous month, and 1.8 less than in May 2020. Unemployment was 0.6 percent below the national average, but 0.2 percent more than the state rate. Out of a total countywide labor force of 12.381 workers, 11,733 were employed and 648 were unemployed.

At 5.0 percent, Benton County’s unemployment rate remained unchanged from the previous month. This represents a decline of 4.3 percent over the past year, when unemployment reached 9.3 percent, during the pandemic. By comparison, Benton County recorded 0.8 percent less unemployment than the national average and was the same as the state rate. The labor force in Benton County for May totaled 6,730. Of this number, 6,392 are employed and 338 are unemployed.

At 2.7 percent, Moore and Williamson counties continued to have the lowest unemployment in the state.

Shelby County had the second-highest unemployment for the month. Its new statistic of 6.8 percent is 0.1 of a percentage point lower than April’s rate and a 3.5 percentage point drop when compared to May 2020.

The latest statistics show Tennessee employers added 5,000 jobs between April and May. The largest increases occurred in the professional/business services, leisure/hospitality, and financial activities sectors.

When comparing May 2021 to May 2020, non-farm employment across the state increased by a remarkable 231,500 jobs. The leisure/hospitality sector created the most jobs during that time. The manufacturing and professional/business services sectors created the next highest numbers of jobs over the year.

The Tennessee Virtual American Job Center (VAJC) at www.TNVirtualAJC.com allows Tennesseans to research different programs that can help them remove barriers to employment so they can more easily reenter Tennessee’s workforce. The VAJC allows job seekers to do this on their schedule, anytime, anywhere. ApprenticeshipTN.com is another valuable website to check out. Additionally, there are more than 80 American Job Centers across the state can provide a starting point to a new job.