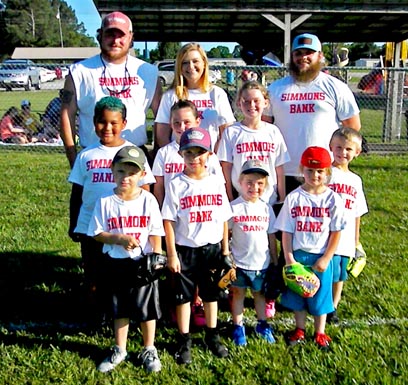 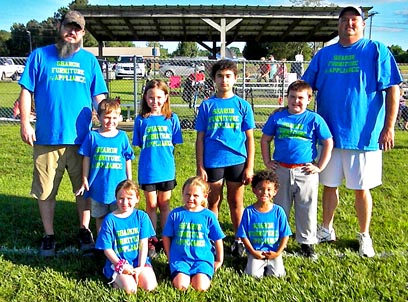 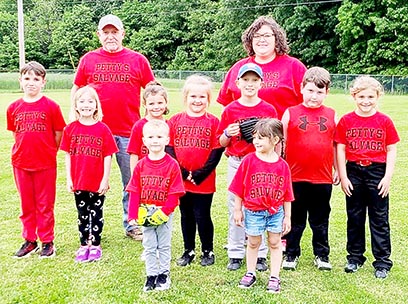 SHARON – The City of Sharon has, like many towns in Weakley County, held sports for the children of all ages to take part in during the summer months. This year will offer a new opportunity for children not only in Weakley County, but in all of West Tennessee as Sharon is preparing to host a fall T-ball league, the first of its kind.

Bill Bostwick of Sharon Parks and Recreation Department said this year had many ups and downs for the T-ball league as it almost seemed there would not be enough children interested in one this summer. At the beginning of the season, only about 20 children signed up. The deadline was pushed back to allow for more sign ups, and this allowed 10 more children to join, making three teams. Sharon did start later than was expected, but they were happy to still host T-ball games this summer.

There are three T-ball teams this year and no little league. The last couple of years saw not as many children playing in Sharon as in the past. But this year, the teams had 31 children sign up and two ended up quitting.

The teams are coached by Chris Capps, who is the coach for Sharon Furniture and Appliance team; Austin Dallosta, who is the coach for the Simmons Bank team, and Cheri Pierce, coach for Petty’s Salvage’s team. Bostwick said they all have worked very hard and he was happy with the enthusiasm that they have brought to the sport this year.

He announced all three coaches of the teams this summer are interested in a fall league.

What started the conversations about a fall T-ball league was that many of the parents have been very supportive and active in attending games and buying from the concession stand. Many of the parents talked about the possibility of having more games for the children to have in the fall. The coaches were also very supportive of the idea of having a fall league for the children and having them be out more and being active.

The City of Sharon has never had a fall league for T-ball or baseball.

The league would consist of children ages 4-8 (boys) and 4-9 (girls) and he noted that some children might go to other towns to play soccer, but there should still be enough interested to have a fall league.
Bostwick also noted that this year is different from the previous ones in how the players have been acting on the field. He noted all of the players have been standing up and listening. They have all been trying their best and have been very active and Bostwick thinks this is because so many children had to stay inside for so long due to COVID-19 that they are excited now more than ever to go outside and play in team sports.

“We do this for fun. We give out trophies, but this is for fun. All the kids get the bat and play on the field. We don’t let the kids strike out,” Bill stated about having sports in Sharon. “And even the last kid, we let the last kid run all the way around and hit home plate. Just little things like that, that make it fun, he said.”

He also said the T-ball they play is easier for the children than other teams in the county. This is because the teams do not play in any tournaments and do not have to follow any rules other then what they teach the children. The main reason for changing the rules is to make sure that each child that participates is able to have fun, play, and gain an interest in playing ball in the future.

Bostwick said there have been children who played at Sharon that went on to play softball and baseball in middle and high school in Weakley County.

Costs will also not stop any child from playing ball who wants to in Sharon. The department does have a fund set up with the city that is supported by fundraisers. The money raised is then used to make sure no child is turned away because of money.

This season there was one child who wanted to play on the team, but he was late to sign up and did not have a mitt, bat, or ball. But, there had been a donation made by a parent of a mitt, ball and bat for the department to have as needed. Thanks to this donation, the child was able to play this summer.

Some upcoming ideas the department is working on includes a yard sale or selling items during the fall Corn and Music Festival.

The department currently has good sponsors, which makes the season look good for all to have the needed supplies for events in the future. Bostwick did note they could sell shirts for $8 this year and use the rest of the money they have from this season.

There are no dates locked in for when sign-up or practice will start for the fall league, but Bostwick said he hoped to send letters home maybe the first week of school. Potentially, they will start practice sometime in August and begin playing in September, but that is subject to change.

Bostwick said the ideal scenario for the fall league would be to have at least seven on a team, but that the league could still play if they only have six on a team.

For the future, he said that the Babe Ruth League is difficult to get enough players who want to play in Sharon since they only have a junior high school and there are not enough players in that age group. He said he knows that there is hope, but it seems hard. But he does have hope that the T-ball league will continue to grow.

Bostwick has been the parks and recreation director since 1985 and started working for the department in 1983. The Sharon Parks and Recreation staff consists of Bostwick, Tucker Turner and William Witherington.

The fall T-ball will be open to all children who live in Weakley County or around West Tennessee.

As far as Bostwick knew, this was the first time in the history of Weakley County that there will be a fall T-ball league, because other towns and schools offer flag football and soccer. Sharon also has a basketball league that plays during the winter months.