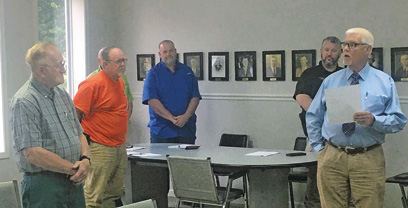 GLEASON (June 21) – During the City of Gleason’s Board of Mayor and Aldermen meeting held last week, members finalized the city’s Fiscal Year 2021-22 budget and recognized a community member for his service.

“During the summer months,” Mayor Anderson explained, “we’ll be inviting and honoring some of our more senior businesses.” The honoree for this meeting was former Gleason Agriculture teacher, Edgar Floyd.

Floyd and his wife, Peggy, still reside in Gleason where they own and operate their own business, Floyd Greenhouses. In 1958, Floyd began his career as an agriculture teacher at Gleason School. In 1962, he and J.T. Moore, principal of the school, at the time, began their own business. Together, they cultivated and sold various plants such as peppers, tomatoes and sweet potatoes. In 1996, Floyd retired from teaching, but remains the longest-working agricultural teacher at Gleason School.

“This couple truly are pillars of the community,” Mayor Anderson said, his voice reflecting sincere admiration for both Edgar and Peggy Floyd.

Anderson also recognized the Parks and Recreation Department for its diligence and care of the city’s parks. “They really have gone above and beyond,” Mayor Anderson said of the park staff.

He also commended the Girl’s Basketball Team’s coach for a profitable concession stand.

Mayor Anderson presented the board with a document sent by the TN State Legislature that changes the residence requirement of the City Recorder. The resolution makes it possible for the City Recorder to live outside the city limits. Gleason City Attorney Beau Pemberton, said the resolution “has to be approved by at least a two-thirds majority,” meaning the board had to vote on its acceptance. This was the second vote on the resolution, which passed without opposition. An approved copy of the resolution will then be sent back to Nashville.

Next on the city’s agenda was the question of what to do with a vacant lot at 714 West St. The lot was put up for sale by way of sealed bids, with the minimum bid at $5,500. The lot received no bids. Mayor Anderson left it up to the board to decide what, if any, further action would be taken. Alderman Wade Cook began a brief discussion on whether or not the property could be partnered with another property. This would, in theory, make a larger sale of the two more attractive. The proposal led to further discussion, but no concrete decisions were made.

Mayor Anderson then announced that the application for the Care Act Grant was submitted. Approval of the application would make it possible for Gleason to address the city’s infrastructure issues and problems with its sewer system. In preparation for this, the city installed a series of cameras that will help the proper departments pinpoint the most problematic areas of the system’s failures.

Gleason’s City Board meeting closed with the mayor announcing the plans for the Independence Weekend Celebration, which will take place on July 3 in downtown Gleason. The event will include live music, a Classic Car Cruise-In, food trucks and fireworks. Gleason resident Ricky Morgan and his band, Midlife Crisis, will kick off the event at 6 p.m.

On July 24th, in Snider Park, the Weakley County Playhouse Theater will present a production of “Anne of Green Gables,” which will feature a Gleason resident in the lead. The event will be a live performance and will begin at 7 P.M.