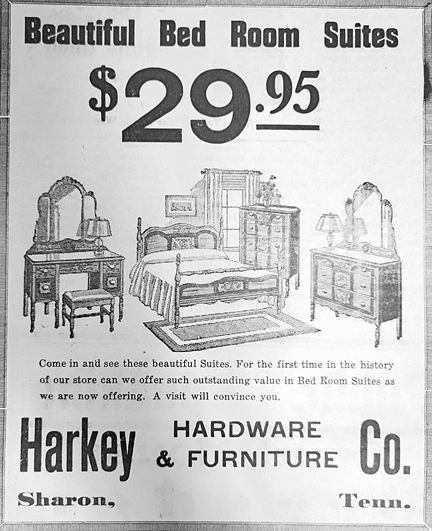 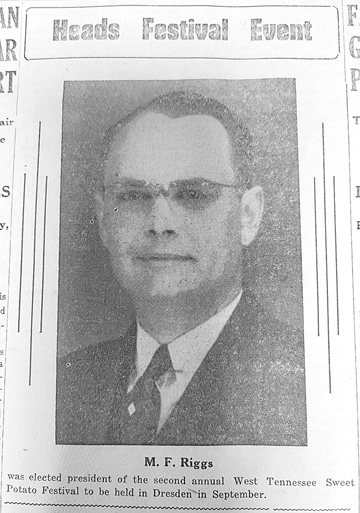 During the summer months of Weakley County in 1938, numerous robberies were taking place in Dresden and in the surrounding area. AN article, titled, “Robbery Epidemic Strikes in Dresden,” read as follows:

“Another outbreak of house breaking struck Dresden during the week just passed, with two business, houses, victims and one residence. One Sunday night, Uptown Café was entered through the basement. The pin-ball machine was jimmied and about $20 extracted. Mr. and Mrs. Pentecost say that nothing else was stolen.

At Mayo’s, a rear window pane was removed in an effort to gain entrance. Here the thief was evidently frustrated. The home of Robert G. Jeter was entered during the absence of Mr. and Mrs. Jeter. The loot taken here was a couple of bathing suits – one belonging to Mr. Jeter and the other the property of Mrs. Jeter.”

In other news there were reports on the Memorial Day event that was held in Gleason. In this story, it told of how the Gleason American Legion and Auxiliary had a program held at the Gleason High School auditorium. The Martin High School Band played and Judge Hal Holmes spoke. There were music, poems, and speeches given as part of the program to honor those on Memorial Day.

In farm news, there was an interesting note that week involving hogs, “Hilburn Templeton, Public Well farmer, lost seven shotes the past week, supposedly from some kind of poison. They averaged 120 pounds each. Thus his loss is a heavy one.”

This week was also one of the few times the paper to this point printed the property transfers with the lowest being sold for $150 and the highest for only $1,375.

A tragic car accident was one of the top stories of that week’s paper titled, “Planned Visit Halted by Grim Tragedy; Death.” Molly Johns of Dukedom died in an accident on the Dukedom Highway. Her nephew, who was in the car at the time, Frank Midcar, was severely injured. The accident occurred when another vehicle was passing by Johns. Their vehicle slid on loose gravel causing a collision that took the cars into a ditch. Molly Johns was reportedly thrown from her vehicle when “[threw] Mrs. Johns into the ditch under the wreckage.”

The other big headline in the paper was not any lighter in topic with, “Five Bridges Swept Away by Flood in Bear Creek.” The county saw plenty of rain with reports of six and a half inches falling in some areas over the course of about three hours. This resulted in five bridges being swept away and farm lands to face massive flooding and crops being destroyed or washed away with the flooding. The highway to McKenzie was also covered with water for 100 yards in one report.

Another robbery was also reported that week, this time at a physician’s office. Dr. Roy Mabry’s office was broken into and two instruments were taken, a stethoscope and ones to look into people’s ears. There were no leads as to who stole the items.

That week was slow with reports of deaths, births, and general event notices. However, there was a story over an expected suicide that was very bizarre for Weakley County.

Rufus Collins was 75 and lived in Martin, where his body was found outside slumped against a tree with an empty bottle nearby. Earlier in 1938, his wife divorced him and later in April, Rufus went to a store to ask for the clerk to phone the judge, that Collins, himself, was dead. But when they arrived to the location, there were no signs of life anywhere. Rufus then appeared in court for disorderly conduct from the false report. He explained he did the false death report to try and get sympathy from his ex-wife so she would return home to him. Soon before his death, he sold all of his livestock and feed before leaving his house on the day of his death. He piled all of his belongings, dowsed them with kerosene and lit the pile on fire. It was suspected that he had also drunk carbolic acid to cause his death.

“Roy Paschall, 62, passed away at his home here Wednesday at an early hour. While the deceased had been confined to his room for two weeks, the end was unexpected.

The funeral, held at the First Baptist church Thursday afternoon by Revs. T. N. Hale and Dewey Stubblefield, was attended by a large concourse of sympathizing friends. Interment was in Dresden cemetery, with Bowlin & Riggs in charge.

Surviving are his companion; one daughter, Mrs. Joe Mullins of Fulton; and two grandchildren.

Roy Paschall was the son of the late Hiram Paschall and wife, the latter surviving, as does also one sister, Mrs. C. H. Hilliard. He was born and reared in Dresden, and in 1887 enlisted for service in the Spanish-American War, going to camp. For the past two years he had been a most attaché of Judge McWherter’s office, where he rendered a service appreciated not alone by courthouse officials, but the public in general.

Being of a social, congenial disposition, he easily made acquaintances. When, aged, feeble people came to the court house seeking marriage records it was generally Roy who dug into the musty old books to supply the required evidence. Though this was no part or parcel of his official duty, he did it as a service to these aged ones – and did so cheerfully. Through it, he became well and favorably known throughout the county.

We will miss him. Peach to his aches!”

Local law enforcement agencies were busy in the Latham area as there was a large raid of a still. In “Deputies Take Big Still And Ten Gallons Booze” it was reported that officers had received a tip of a still in operations. During the raid, a “… most complete liquor making outfit ever taken in this county,” was seized. The still was 30 gallons at capacity and there were 10 gallons of new barrels mash ready to be used. When the cops arrived, three men ran into the woods with one carrying 10 gallons of fresh liquor, he dropped this during the chase and none of the men were caught.

A strong thunderstorm that week, resulted in the death of 26-year-old Buck Fimson, when he was struck by lightening. Fimson had been in the field plowing when the storm came up. He ran into the barn to seek shelter from the rain when he was struck. A mule was also killed during the storm. There was no other damage to the property or to the surrounding area of where the lighting struck in the article’s report.

Another robbery was reported, this time at a filling station in Palmersville in the article, “Filling Stations Looted, Palmersville.”

“The two filling stations at Palmersville, situated on the highway were broken into and looted Thursday night, so our good friend G. B. Casey, informs us.

“The stations are opposite one another, one on the east side and the other on the west side of the highway at the intersection of Main street. At both places the pin-ball machines were jimmied and the cash, amounting to several dollars in cash, taken. At Gilbert’s place some sugar, cigarettes, etc., were also stolen, while the small machines at both Gilbert’s and Barber’s were carried off bodily.”

In lighter news, the achievements of local youths were highlighted in the following article, “Dresden Youths In Winning Class.”

“N. H. (Bubba) Moran, son of Mr. and Mrs. Jas. H. Moran, was given the horsemanship medal, while Richard Brasfield, had two medal awards – one for proficiency and another on machine gun marksmanship. The boys all returned Sunday – tanned, tired and glad to get back home. The other three representing Dresden were Claud Hilliard, Jr., Macon Byars and Charlie Speight.”