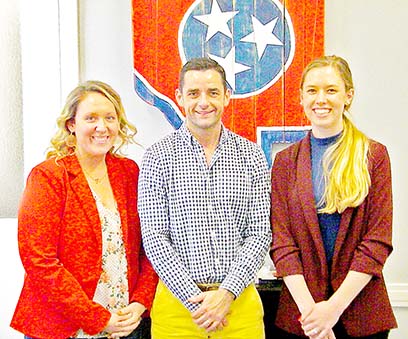 WEAKLEY COUNTY (April 23) – Members of the community will no longer see a familiar face at the Weakley County Court House. Erica Moore served as the Communications Director for Weakley County Government and was primarily seen working at the County Mayors’ office. On Friday, Moore spent her last day working for the county government before going into the private sector, and county departments gathered to say goodbye. As part of the reception, snacks were offered and Moore received gifts from thankful comrades.

Moore was in that position for the past five years and said, “It’s been a pleasure, and it’s honestly been more than I ever could have ever anticipated.”

She said Jake Bynum had been a great mayor to work under, and getting to know not only other government officials, but also the community all around Weakley County was something that she loved about her job — noting that working in government during COVID-19 was a challenge and a struggle but many people were able to step up and continue to work for the community.

On her new chapter outside of government, she said she will always be available to her replacement, Kirsty-Rhe Janse.

Moore wanted to work more in a lighter position and plans to still be in the community participating and helping.

She has been in Weakley County for 15 years and has a four-year-old daughter.

Although Friday was a day of departure in the county courthouse to bid farewell to Moore, it was also a day to introduce Janse.

Janse, originally from Memphis, came to Weakley County to attend college at UT Martin. She graduated last year from UT Martin with a degree in communications. She began working last week to train and learn more and is already enjoying what the job will offer.

She noted that everyone around the courthouse has been very friendly and welcoming.

When asked how she felt about working with the community, she said, “I’m so excited about all of it. Just the amount of opportunities that I know is ahead of me just makes me giddy with excitement. Just getting to work more closely with Weakley County because since coming to Martin, I’ve just been so overwhelmed how really amazing the people are, and I am really excited to see that from the other municipalities. I’m just excited to work with all these people and seeing the needs in the community and helping in any way I can.”

Bynum commented on Moore’s departure on Facebook, “From the beginning, Erica has been a gifted and capable member of the team. In addition to her work ethic, she also exemplifies what it means to be caring and compassionate. Erica has helped to make Weakley County a better place to live, work and thrive. She has promoted the community as well as various initiatives and activities. Erica has supported and assisted numerous people both in and outside of Weakley County Government … While I am sad to see her go, I am excited about her new adventure. As a leader, we should support those around us to be successful and encourage growth beyond one’s current role, and that is exactly what I want to do. With that being said, if you ever have the opportunity to work with or for Erica Moore, do it!”