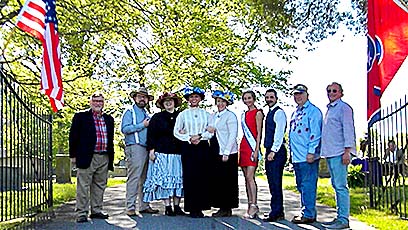 DRESDEN (April 25) – One of the many traditions of the Iris Festival is being able to learn more about the history of not only Dresden, but also Weakley County. The annual cemetery walk through Sunset Cemetery in Dresden was held Sunday, April 25. Many residents came out to learn about the many interesting people that used to live in Dresden.

This year’s theme for the tour was Dresden Fraternal Organizations and Societies. The organizations presented were the Entre Nous Club, the International Order of the Odd Fellows Washington Lodge Dresden #5, Freemasons Dresden Lodge #90, Woodmen of the World – Dresden Camp; and a story of a man lynched at Sunset Cemetery.

The first stop was the Entre Nous Club, which used to be a society and literary club in Dresden. Kate Bynum, Erica Moore, and Ann Marie Norrid presented the lives of three members: Nannie Drewry, Ida Baxter and Miss Bessie Barr.

This club in Dresden used to host many different parties and events for not only the women in the community to attend, but also their husbands. They would talk about the other happenings in Dresden and ways to help its fellow members. There were game nights, costume parties, going-away events, and much more. All three women lived in Dresden and never married, with their club being an excellent job for them. They even played a game with the audience that was frequent during club meetings.

The next stop was to meet Erasmus Egbert (E. E.) Tansil, played by Will Norrid. Tansil served in the Confederate Army and was one of the first in Weakley County to do so. When he returned from the war, he became a member of the International Order of the Odd Fellows or IOOF. This was an organization in Dresden where members left politics and personal feelings at the door. They promoted patriotism and community over politics. This was also one of the few organizations that let women join.

Lake Erie Holladay, played by Jake Bynum, was a well-known member of the Dresden community. He had a law practice, being a very active member of the local Methodist church, a father and husband. He was also a part of two organizations in Dresden. A member of the Freemasons and Woodmen of the World, Holladay was very active in participating in both of these organizations. Both of which had numerous community outreach events and meetings.

The final stop was to a person with no organizational affiliation, but he was the victim of an organized lynching at Sunset Cemetery. Mark Maddox played Henry Taylor, who used to work at many farms when needed. The story recalls that he and other men started to drink one day, and eventually, one was killed. Henry Taylor was blamed for the murder, but it was unclear in the retelling if he committed the murder or not. He was arrested and put into jail, where a crowd broke in, shot him multiple times, and buried him North to South at Sunset Cemetery, which is still an unmarked grave.

When the tour was over, Sunset Cemetery accepted any monetary donations to benefit the cemetery.

Also noteworthy were the 490 American flags placed at the grave marker of every veteran’s grave. These were marked to remind guests of the sacrifice of these servicemen. Flags were placed by Kerry and Martha Killebrew and Carol Moore.