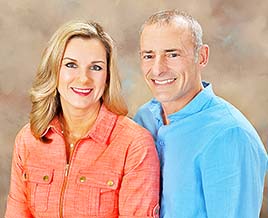 Todd and Wendi Maxey embody all of the qualities one could want in volunteers. While parenting two athletic sons, Austin and Parker, they have given of their gifts and talents in a variety of capacities to their community for many years. They are best known for their sincere dispositions and outstanding integrities. Regarded for being patient, caring, loving, kind, trustworthy, and approachable, the couple’s actions positively impact those individuals and entities with which they work.

These qualities are just a few of the reasons that individuals and entities have enjoyed their leadership and why they are the recipients of the 2021 Tennessee Iris Festival Volunteers of the Year. Ghandi said, “Be the change you wish to see in the world.” Todd and Wendi Maxey live that mantra out daily.

Todd is the chairperson of the Tennessee Iris Festival 5K Race. A capacity which he has served with devotion for the past sixteen years. Under his leadership, the race continues to grow in popularity and participation. The race has become a nationally recognized certified annual event, obtaining USATF certification. He currently volunteers his time as the head coach for Dresden School’s (elementary, middle, and high schools) Cross Country teams as well as their Track and Field teams. He has volunteered his time to Dresden’s community young people as a coach for fourteen years, all while working full time.

Todd maintains a perfect attendance record with his employer, MTD, a company he has been devoted to for nearly 29 years. Additionally, he owns the company Sound Design, which has provided DJ’s and music services for a variety of events both locally and regionally. He also works as a subcontractor in the floor waxing and stripping industry.

A volunteer coach for over 20 years, Wendi enthusiastically served the area young people in a number of athletic programs. She coached T-ball, basketball, and soccer. Currently, she serves as the Volunteer Assistant Track and Field coach for the Dresden school system.

A lifelong athlete herself, Wendi provides personal training and coaching services as an ISSA Certified Personal Trainer. She continues to work with her husband as a volunteer with the Tennessee Iris Festival 5K lending her knowledge and expertise to a sport she loves and embodies.

Furthermore, Wendi is the owner of Visible Changes Hair Salon, personally providing outstanding cosmetology services for more than 28 years. She is known throughout West Tennessee and the Mid-South for her professional work for systems supporting such avenues as fashion, pageant, and stage.

Together, the couple have been married for 27 years and regularly compete together in races locally and nationally which measure speed and endurance. They both hold a number of athletic awards.

In addition to their own awards as coaches, they have trained a number of athletes to qualify for state rankings. In their years of service to the Dresden School System, they have coached at least one young person to the state level every single year they have served. They have coached eight individual state championship titles and have had numerous athletes rank among the top three in their respective fields at a state or higher level.

Todd and Wendi Maxey’s commitment to service will continue to be evident in the lives they touch and in the community they serve. The young people they have coached benefit greatly from the skills and gifts of these two volunteers and the entities they serve are greatly enriched.