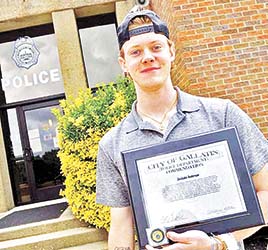 Gleason native JoeBlake Anderson, who now resides in Gallatin, was recognized in the April 2021 edition of WoodmenLife Magazine for helping to save an injured motorist after a car crash.

GALLATIN (April 1) – The Spring 2021 edition of WoodmenLife Magazine features the heroic actions of a former Dresden resident who saved an accident victim’s life.

The article in the nationally-published magazine titled, “Quick-Thinking Teen Saves a Life,” centers on the life-saving efforts of JoeBlake Anderson last spring.

On May 19, 2020, Anderson, who now resides in Gallatin near Nashville, was 19 at the time. He was driving along a peaceful country road in Gallatin, when he heard a crash and saw a Chevy S10 laying on its side. The badly-damaged vehicle had a smashed windshield, with a deep bend in its open hood.

As traffic came to a halt, Anderson pulled to the side of the road to get a better view. While Anderson watched, three people emerged from the vehicle who appeared to be unhurt. But a moment later, when a fourth man made his way out of the truck, Anderson could see that he was bleeding profusely from one arm.

Anderson’s instincts took over, guiding his actions over the next several minutes. The Gallatin teen ran back to his vehicle where he had a medical kit. Knowing that it’s possible to die from severe arterial bleeding in less than five minutes, Anderson pulled a tourniquet from his kit and placed it around the man’s arm. Despite having a cast on his right arm, he used a tourniquet to stop the bleeding.

Next, Anderson helped the man lie down, elevating his feet to direct blood flow back toward his brain so he wouldn’t lose consciousness.

A few moments later, paramedics arrived on the scene and took over.

According to Gallatin Police officers, the accident victim was transported to Skyline Hospital.

Since the accident, the man has recovered and regained full use of his arm.

Police also say the 45-year-old driver is at fault for the one-vehicle wreck.

The first responders who arrived at the wreck scene were impressed that a 19-year-old remained levelheaded enough to competently handle all aspects of the situation. Later that day, the Gallatin Police Department presented Anderson with a Citizen’s Commendation and a department coin for striving to meet the challenge and keeping people safe.

JoeBlake is the son of Clay and Kayla Ellis Anderson, and the grandson of Sue Maddox and the late Dwayne Maddox, who operated Maddox Garage; and Mr. and Mrs. Joe Anderson.

The teen attributes his medical training to his dad, Clay Anderson, a 30-year law enforcement veteran, who serves as a Captain with the Humphreys County Sheriff’s Department. Anderson noted his father has always stressed the importance of being prepared in case of an emergency. So, he keeps a full med kit and tourniquet in his car at all times.

When asked what the commendation means to him, Anderson said, “It means a lot. I told my dad I don’t know how to feel about all this. I didn’t get out of the vehicle for any sort of acknowledgment. I was trying to do what felt right, and what felt right was helping someone to the best of my ability.”

Anderson’s grandmother, Sue Maddox, says that helping others is an essential part of her grandson’s personality. “He’s very tender-hearted,” she said. “He’s kind of a special boy in that he’s always thinking of other people before he does himself. He’s always been that way, since he was a little boy.”

Maddox recalls a winter day when Anderson saw a man without a jacket walking in the cold. Anderson, who was just 16, literally gave the man the coat off his back to keep warm.

Anderson says he hopes to follow in his father’s footsteps and be a police officer following college.

Anderson, now 20, attends college at Volunteer State and works as a reserve deputy sheriff in his father’s department. He says the most important thing this experience has taught him is that anyone can make a difference in an emergency, even with minimal skills.