DRESDEN – An investigation into a fire at a Weakley County church by special agents with the Tennessee Bureau of Investigation; the Bureau of Alcohol, Tobacco, Firearms and Explosives; and the Weakley County Sheriff’s Office, has resulted in the arrest of a former Dresden volunteer firefighter on an arson charge.

Codie Austin Clark, 25, of Sharon, who is accused of setting fire to a Weakley County church on Easter Sunday, is charged with one count of Aggravated Arson of a Place of Worship and three counts of Arson.

The Weakley County Sheriff’s Office requested the assistance of the TBI in the investigation of an Easter Sunday fire at New Salem Presbyterian Church, located on Highway 89 between Dresden and Sharon.

With the assistance of the Dresden Fire Department, which had been conducting an internal investigation involving Clark following a series of recent fires in the area, TBI agents determined the church fire had been intentionally set and that Clark was the individual responsible.

Clark was arrested Wednesday, April 7, based on evidence uncovered in the investigation.

At Thursday’s bond hearing, Weakley County General Sessions Judge Tommy Moore, who is also a Dresden firefighter, recused himself from the case.

Hearing the case is Gibson County General Sessions Judge Mark Agee, who set Clark’s bond at $50,000 on the condition the defendant undergoes a mental health evaluation.

A preliminary hearing is set for Friday, July 9 at 9:30 a.m. in the Weakley County Jail Courtroom.

New Salem Presbyterian Church was organized in 1849. The building standing today was built in 1893 and is one of the oldest landmarks in Weakley County.

In a Facebook post, Jamie Travis Gallimore said, “Praise the Lord there was minimal damage and the church building is still standing. It is a historical landmark in our county that many are familiar with. Please be in prayer for the minister, congregation and families involved in the many days ahead.”

The church first came about from a campground meeting. The meetings were held in crude brush arbors and were called the Jones’ Camp Meeting Grounds after Israel Jones.

The meetings would sometimes last for weeks. This form of worship continued until 1849. William C. Jones gave the land for the church in 1850. The carpenters who built the first structure boarded with Mr. and Mrs. Charley Kilgore; and Joe Miller and Bill Mangrum painted the structure.

The church continued to grow and on March 11, 1893, the church Session met for the purpose of making plans to build a new building. 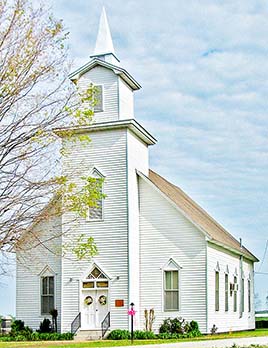