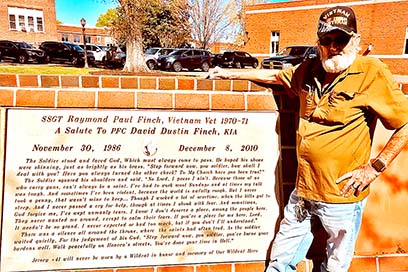 MCKENZIE – Former Bethel student-athlete David Dustin Finch was recently honored with a plaque installed in Bethel’s Alumni Garden. The former football player from 2005-2009 was killed in Iraq in 2010.

Raymond Finch, Dustins cousin contacted Bethel Account Specialist Heather Megaw wishing to do something in Dustin’s memory. They orchestrated the project of installing a plaque in his honor and memory in the garden.

Finch’s No. 41 has been retired and will never be worn by a future Wildcat. His jersey is on display in the Holland Room at Wildcat Stadium.