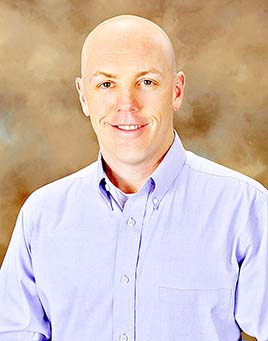 Eric Smith was born in Hattiesburg, Mississippi, in 1976. He was raised in a town about the size of Dresden, called Collins, Mississippi. He graduated Collins High School in 1995 and was chosen as Mr. CHS his senior year. Eric went to the Mississippi Law Enforcement Officers Training Academy in 2000 and was awarded the “Top Cop” honors. His father, Stann Smith, has been the sheriff in his home county, Covington County, for 16 years.

Eric married Kerri McCabe Smith in 2004 and she is currently employed by Bethel University. Eric started with the Weakley County Sheriff’s Department in 2005.  Kerri and Eric moved to Palmersville in 2005 and started their family.  They have four children Kaden (13), Briley (11), Kinsley (7), and Breelyn (3), and they attend school in Dresden.

Eric has a massive soft spot for children, so he wrote a children’s book, “Sheriff Smith and Justice Investigate the Bedroom Monster,” in 2013. It’s a children’s book to help the relationship between children and law enforcement.

There is also a charity golf tournament every year in Sharon to help raise money for the Christmas event.  With the help of sponsors and players, the charity is able to make the goal of helping 50 children. Eric hopes the charity continues to be a success so as many children as possible can receive help in Weakley County.

For his community contributions and commitment to family, Eric Smith is the 41st annual Tennessee Iris Festival Citizen of the Year recipient.